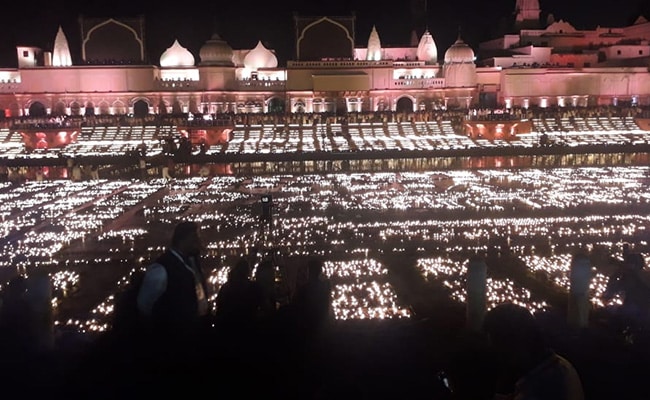 The tableaux was designed by the Tourism department and the Information department.

The divine scene of the return of Lord Ram, Sita and Lakshman to Ayodhya by a ‘Pushphak Viman’ after 14 years of exile was recreated in the presence of Uttar Pradesh Chief Minister Yogi Adityanath, Governor Anandiben Patel and scores of people at the Ram Katha Park on Sunday. 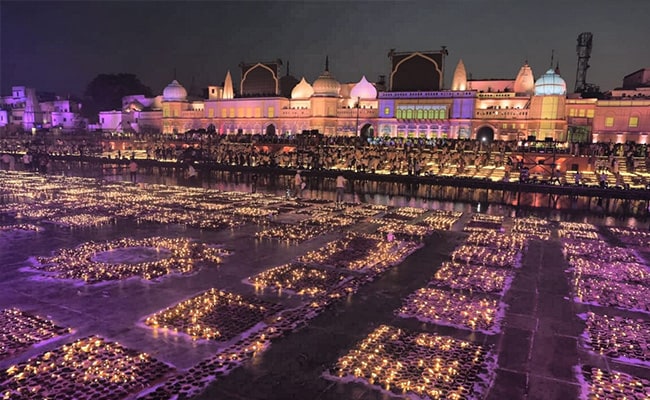 The homecoming of Lord Ram, Sita and Lakshman was staged at a programme organised prior to the mega event Deepotsav. Chief Minister Yogi Adityanath, Governor Anandiben Patel and Deputy CM Brajesh Pathak gave them a grand welcome.

Flowers were also showered from Pushpak Viman to welcome Lord Ram. The entire city of Ayodhya erupted in excitement upon seeing this divine picture. Everyone present at the venue was overwhelmed. Earlier today, the 6th edition of ‘Deepotsav’ celebrations comprising sixteen spectacular tableaux based on episodes from the Ramayana were taken out in the holy city. Tourism and Culture Minister Jaiveer Singh flagged off the themed tableaux which were taken out from Udaya Intersection to Ram Katha Park in Ayodhya.

Speaking on occasion, the Minister of Tourism and Culture said that the stage is set for Deepotsav celebrations on a grand note in ‘Ram Nagari’ today, adding the number of diyas (earthen lamps) to be lit up to celebrate Deepotsav will set a new world record. In this Deepotsav, the symbolic coronation of Lord Ram will be performed by Prime Minister Narendra Modi. “The Deepotsav celebrations will remind visitors of Ayodhya as it was in Tretayuga when Lord Ram returned to Ayodhya after conquering Lanka and how the people of Ayodhya had welcomed him. Treaty will come alive today in Ayodhya,” he said. 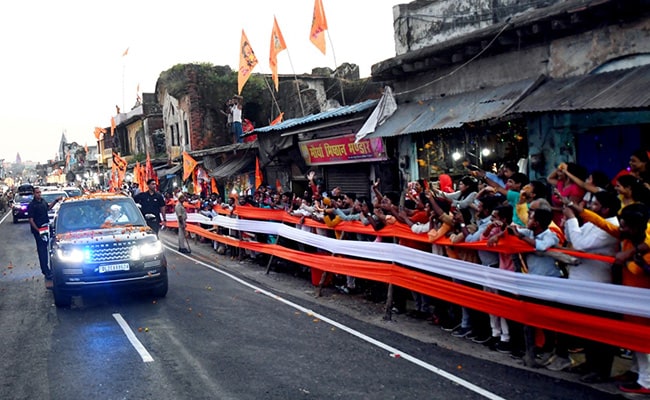 Jaiveer Singh further added that the event will introduce the world to the rich Sanatan culture and traditions of India and the significance of Lord Ram for every Indian. 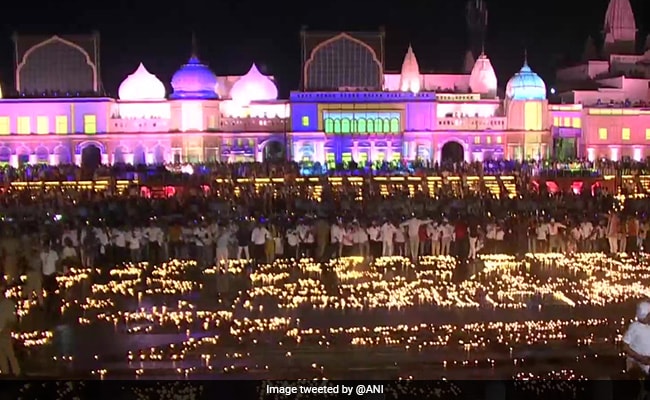 “The tableaux have been designed by the Tourism department and the Information department and will replicate Balkans, Ayodhyakand, Kishkindhakand, Aranyakand and Lanka Kand episodes, in addition to presenting glimpses of the Yogi government’s campaign against criminals and land mafia,” the Tourism and Culture Minister said.