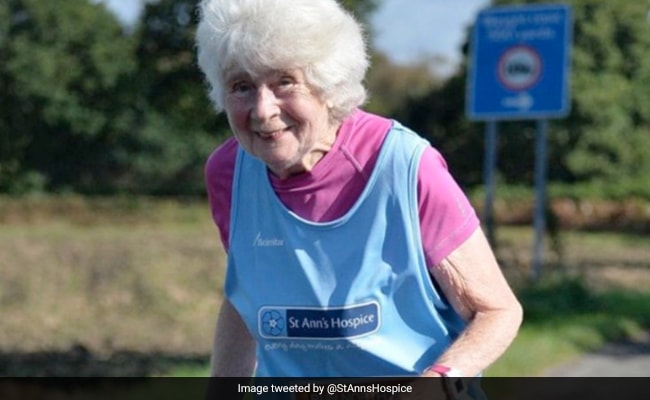 Picture shows Barbara Thakray who became one of the top finishers in a marathon.

An 84-year-old woman became one of the top finishers in a marathon held in Altrincham, the United Kingdom on Sunday. In the race held on Sunday, Barbara Thackray, accompanied by her son James, registered a chip time of 01:26:45, according to a report in Altrincham Today News.

The 84-year-old started running at the age of 77. She started with running 20 kilometres (12 miles) every week during lockdown, saying the exercise had kept her body functioning.

“I think it enables us to keep our body going,” she told the BBC.

Ms Thackray was raising money for St. Ann’s Hospice in Heald Green, where her late sister Audrey was a patient, the outlet further said.

According to Altrincham Today News, she has already surpassed 1,200 pounds (Rs 1.11 lakh) in total. Ms Thackray put in a lot of effort in getting prepared for the marathon. She was running 10 km twice a week, and has no plans to put her running shoes away just yet.

Ms Thackray’s son James had travelled all the way from Hong Kong in order to be with her at the starting line. He was quotied as sayung by the outlet, “I’m incredibly proud, she’s done a great job at motivating others to take up running and gets us all involved in joining her at races.”

“I’m so happy to have ran the race next to my son, James, and share the love I have for running with him,” she added.

She also mentioned that St Ann’s Hospice was an “incredible cause” to be running for. The organisation with its headquarters in Heald Green is gathering money to construct a new hospice close to its existing one.