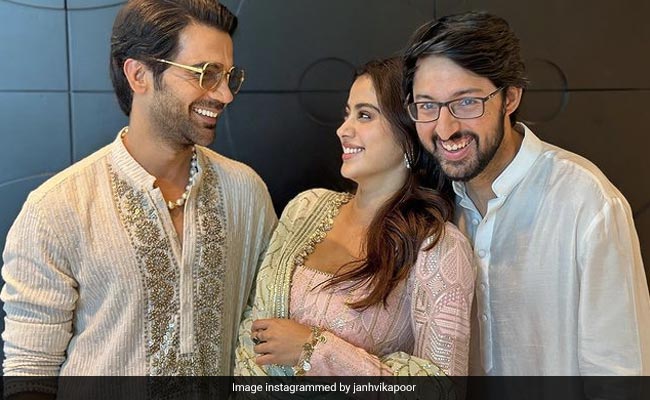 Janhvi Kapoor’s Diwali album is all things glamorous. Don’t believe us? Rush straight to her Instagram timeline and take a look at her latest post. She has shared a set of pictures featuring herself, Rajkummar Rao and director Sharan Sharma. After looking at the album it is safe to say that the trio are having a blast this festive season. Janhvi looks gorgeous in a baby pink suit. Sharan and Rajkummar Rao have picked finely tailored outfits, in shades of white, for the get-together. For the caption, Janhvi wrote, “Mr and Mrs Mahi + Nirdeshak Sahab [Director]  #HappyDiwali.”

Mr and Mrs Mahi, which is a sports drama, will mark Janhvi Kappor and Rajkummar Rao’s second collaboration after Roohi. Meanwhile, fans have flooded the comments section with red hearts emojis. Take a look at the pictures here:

Now, check out Janhvi Kapoor’s favourite colour for this festive season. The actress picked a stunning lehenga set from the shelves of Manish Malhotra for the Diwali party, held at the designer’s home in Mumbai. Along with the pictures, she wrote, “I think I found my new favourite colour #diwaliszn.”

Janhvi Kapoor is also gearing up for the release of her upcoming film Mili, which is a Hindi remake of the 2019 hit Malayalam film Helen. Both movies are by Mathukutty Xavier. Mili also marks Janhvi’s first collaboration with her father, producer Boney Kapoor. Sunny Kaushal and Manoj Pahwa are part of the movie. It will be released on November 4. Janhvi’s Mili will clash with Katrina Kaif, Siddhant Chaturvedi and Ishaan Khatter’s Phone Bhoot at the box office.

Janhvi Kapoor also has Dostana 2 in the pipeline. She was last seen in Good Luck Jerry, by Siddharth Sengupta. It was released on July 29.