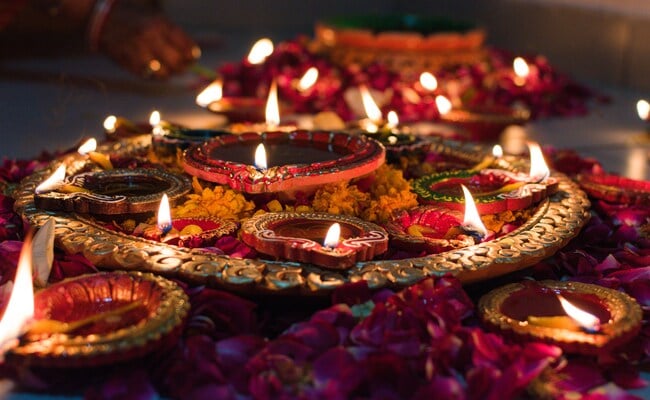 Colourful lights illuminated buildings and earthen lamps dotted houses as people across the country celebrated Diwali with pomp on Monday after two years of muted festivities due to the pandemic.

People, dressed in their finest, exchanged sweets and gifts, visited temples and greeted each other.

Some restrictions on bursting of firecrackers, particularly in the national capital, however, remained in force.

President Droupadi Murmu, Vice-President Jagdeep Dhankhar and Prime Minister Narendra Modi greeted the people of the country and hoped the festival will bring happiness, wellbeing and strengthen the spirit of mutual cooperation and harmony.

Like previous years, Prime Minister Modi celebrated Diwali with soldiers. This time it was in Kargil.

Addressing the soldiers, he said India is against war, but also underscored the need for strength to ensure peace and asserted that its growing power boosts the chances of global peace and prosperity.

India stands for peace and has always considered war as not the first but last resort, but its armed forces have the strength and strategies to give a befitting reply to anyone who casts an evil eye on the nation, he said.

The whole world is looking at India which is a “balancing force”, he told the soldiers at the site of the armed forces’ heroic feats in the Kargil War in 1999 as India beat back Pakistani forces.

Mr Modi invoked the epics of Ramayana and Mahabharata to assert that it is in Indian tradition to avoid war be it in Lanka or Kurukshetra and the country stands for world peace.

One of the most popular Hindu festivals, Diwali is associated with the day Lord Ram is believed to have returned to Ayodhya with his wife Sita and brother Lakshman after defeating Ravana during his 14 years in exile and is seen as a celebration of victory of good over evil.

At the Attari-Wagah border in Punjab, personnel of the Border Security Force (BSF) offered sweets to their Pakistani counterparts on the occasion. Officials of both the forces shook hands and exchanged pleasantries for a few minutes.

BSF and Pakistan Rangers personnel also exchanged sweets at some other border points, including Samba, Kathua, RS Pura and Akhnoor in Jammu and Kashmir.

Delhi Lieutenant Governor VK Saxena and Chief Minister Arvind Kejriwal wished happiness and prosperity to the people of the city on Diwali.

However, the 24-hour average air quality index (AQI) of 312 was still the second-best for the Diwali day in seven years. Before this, the city had recorded an AQI of 281 on Diwali in 2018.

The Delhi government has re-imposed a complete ban on the production, sale and use of all types of firecrackers till January 1, including on Diwali, a practise it has been following for the last two years.

To mark the occasion, Madhya Pradesh Chief Minister Shivraj Singh Chouhan had dinner with more than 400 children orphaned by COVID-19 and assured them all help from the government for their education.

Chouhan and his wife Sadhna Singh hosted a party for such children at the chief minister’s official residence in Bhopal on Sunday night. “This is your mama’s (maternal uncle) house,” the chief minister said, adding that he wanted the children to enjoy, be happy and cheerful.

“It should be our endeavour that today every house should be illuminated with the spirit of harmony, there should be ‘Ramatv’ all around,” he said in a tweet.

The chief minister also said he took ‘darshan’ at Ram Lala and Hanuman Garhi temple in Ayodhya on Diwali.

The residents of Goa celebrated Diwali by burning huge effigies of demon Narakasur in the early hours today as a long-held tradition on the festival, marking the victory of good over evil.

The Narakasur Vadh (killing of the demon) competitions began in state capital Panaji and cities such as Margao and Vasco at night and continued till early morning today.

Goa Chief Minister Pramod Sawant greeted people on the occasion and expressed hope that the festival will bring peace, joy and prosperity to the state.

“Wishing you a Happy Diwali and Bandi Chhor Divas. I pray to God that each diyaon this Diwali day brings your home success and health,” Punjab Chief Minister Bhagwant Mann said in a video message.

Bandi Chhor Divas coincides with Diwali and it marks the historical release of the sixth Sikh guru, Guru Hargobind, along with 52 kings from a Mughal prison in 1620.

“Pollution is a problem and has become a challenge. Therefore, efforts should be made to celebrate green Diwali,” he said.

Maharashtra Chief Minister Eknath Shinde, while attending a Diwali event in his hometown of Thane, said: “May this Diwali bring prosperity and good health to you all. We have to put the development of the state on fast-track and give justice to all sections of society. An era of development has begun.”

He also announced City and Industrial Development Corporation’s new housing scheme under which 7,849 flats will be available at affordable rates at Bamandongri and Kharkopar in Ulve area of Navi Mumbai.

The festival of lights was also celebrated across Tamil Nadu and Puducherry. In lines with a Supreme Court order, the Tamil Nadu government had specified that crackers should be burst from 6am to 7am and 7pm to 8pm.