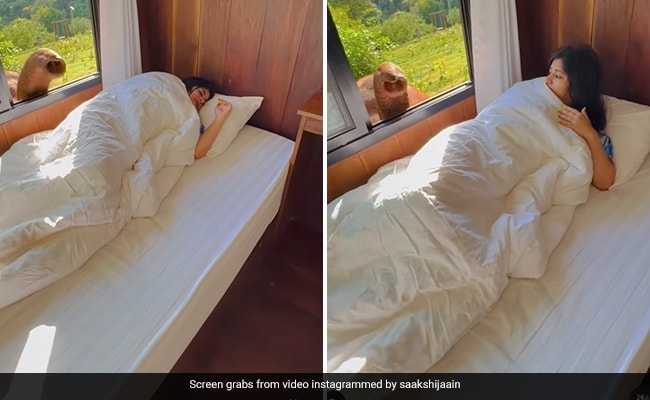 Netizens flooded the comment section with heart and love-struck emojis.

A viral video has captured the adorable moment when a woman was woken up by an elephant when she was asleep in her hotel room. Shared on Instagram by content creator Sakshi Jain, the clip opens to show the woman sleeping on her hotel bed when a curious elephant peer into her room and gently pokes her with its trunk.

In the caption, Ms Jain said, “This resort in Chiang Mai, Thailand has elephants waking you up instead of the reception call or your alarms. Even more better that you can walk, feed, bath and play with them close up. This experience was something different.”

“When I felt that air blow from her trunk. Wake up call from this cutie,” read the text on the video.

Since being shared, the short clip has accumulated more than 53 million views and 220,000 likes. Netizens flooded the comment section with heart and love-struck emojis.

While one user wrote, “That’s such an awesome experience. What more could one wish to treasure those memories forever,” another said, “It’s beautiful. But if it was me, I would have screamed louder and ‘RUN’ out of the room without a second thought!”

A third added, “I’d never sleep in anticipation to be woken up like this.” “Really beautiful… Most cutest thing I’ve seen in a full day,” commented fourth.

Meanwhile, last month, another adorable elephant video from Chiang Mai had taken the internet by storm. Megan Milan was visiting Chia Lai Orchid, a sanctuary that rescues elephants, earlier in June when a three-week-old elephant became rather attached to her. The hilarious footage showed the boisterous baby getting close to Ms Megan bumping her to the ground before rolling on top of her.