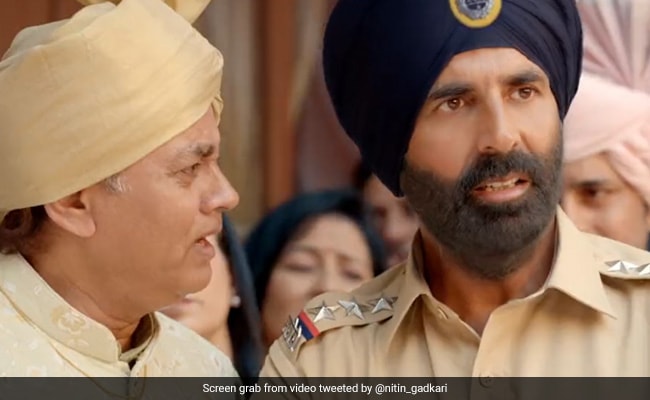 The subtext that the car was gifted by the bride’s father is being slammed by opposition parties.

An ad featuring actor Akshay Kumar, tweeted by Union Minister Nitin Gadkari, for promoting safer cars with six airbags is holding up traffic on Twitter with criticism that it appears to promote dowry.

The ad shows Mr Kumar, dressed as a police officer, chiding the father of the bride for sending off his daughter with the groom in a car with only two airbags after the wedding.

The subtext that the car was gifted by the bride’s father is being slammed by opposition parties, which have accused the government of “promoting dowry”.

This is such a problematic advertisement. Who passes such creatives? Is the government spending money to promote the safety aspect of a car or promoting the evil& criminal act of dowry through this ad? https://t.co/0QxlQcjFNI

1. Disgusting to see Indian govt officially promoting dowry. What even???

2. Cyrus Mistry died because the road design was faulty. That spot is an accident-prone area.

Is this an Ad for dowry?
Tax payers money used for promoting dowry https://t.co/mhHtNVckyg

Road safety, particularly the use of seatbelts and airbags, has come into sharp focus since the death of business tycoon Cyrus Mistry in an accident near Mumbai earlier this month. Mr Mistry and his friend Jehangir Pandole were killed in the crash in Maharashtra’s Palghar. Their co-passengers – Darius Pandole, the brother of Jehangir Pandole, and wife Dr Anahita Pandole – are recovering in hospital after they were injured in the crash.

Police reports said Mr Mistry and Mr Jehangir Pandole were not wearing seatbelts at the time of the crash.

Some road-safety experts have claimed that one of the reasons for the accident was that the three-lane highway bifurcated into two bridges of two lanes each on Surya River. The accident took place when Mr Mistry’s car hit a road divider as the vehicle was approaching one of the bridges.

However, National Highway Authority of India ruled out any design flaw in the highway and said the accident had occurred because the car was speeding.

The Mercedes-Benz SUV in which Mr Mistry and three others were travelling was going at 100 kmph five seconds before the accident, the luxury carmaker said in its findings to the police. The SUV decelerated to 89 kmph when Dr Anahita Pandole applied the brakes, Mercedes-Benz said.

Following the death of Mr Mistry, Union Transport Minister Nitin Gadkari had said that those on the back seats of vehicles will soon be fined for not wearing seatbelts.

In India, airbags are mandatory for the front passenger and the driver. In January 2022, the Union government made it mandatory to install six airbags in each passenger car with a limit of up to eight passengers.