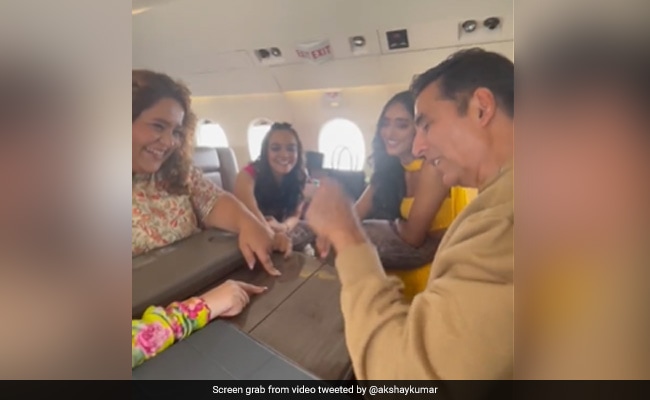 Akshay Kumar, busy with Raksha Bandhanpromotions, shared a fun video with his on-screen sisters – Sahejmeen Kaur, Deepika Khanna, Sadia Khateeb and Smrithi Srikanth. The clip features the actors on a private jet sitting across a table and playing, what seems to be like a classic childhood Indian game, Chidiya Udd – the one in which the leader takes the names of things and you have to quickly think if they can fly by lifting your index finger. They all have their fingers resting on the table in a circle. Their camaraderie gives fans a glimpse of the bond they shared on the sets.

In the caption, Akshay wrote: “Jo mazaa behno ke saath bachpan ke khel khelne mein hai uska koi muqabla nahi (Nothing compares to the fun one can have when playing childhood games with your sisters). Reliving these childhood memories with my onscreen sisters as we head to Pune for promotions,” and added the hashtag #RakshaBandhan11August.

Take a look at the video below:

Raksha Bandhan, directed by Aanand L Rai who is known for helming projects like Zero, Atrangi Re and Raanjhanaa, also stars Bhumi Pednekar and Seema Pahwa in pivotal roles. Akshay and Bhumi have previously worked in Toilet: Ek Prem Katha.

Recently, Akshay shared a picture with director Aanand L Rai, with whom he worked in Atrangi Re (2021), and called him the man who helped him “return to feelings.” “The man who taught me to #ReturnToFeelings. And now it’s almost time for you to return to cinemas, Raksha Bandhan, 10 days to go!” the post read.