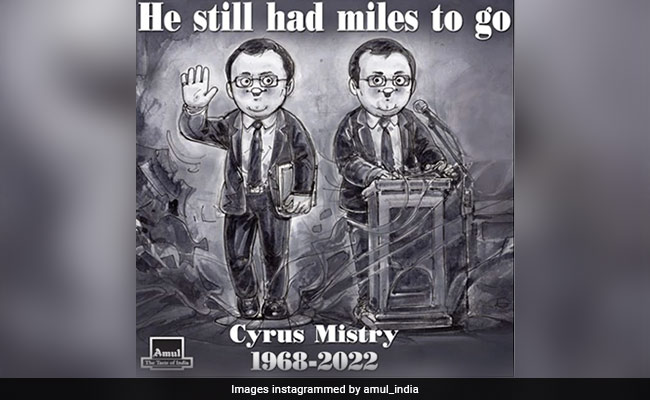 The sudden death of former Tata Group Chairman Cyrus Mistry has left everyone in shock. He was killed in a road accident after his Mercedes car hit a divider in Maharashtra’s Palghar district on Sunday, September 4. Dairy brand Amul has now dedicated its iconic topical to Mr Mistry. On Monday, Amul shared a monochrome topical on social media along with caption, “Tribute to a dynamic businessman…”

Amul shared a monochrome doodle that features an animated versions of the businessman. The caption read, “He still had miles to go, 1968-2022.”

Along with Mr Mistry, Jehangir Pandole, Anahita Pandole, and Darius Pandole were present in the car.

Jehangir Pandole, brother of Darius Pandole, is the other person who died in the accident.

Darius Pandole was an independent director in Tata group firms and had opposed the removal of Mr Mistry as the company’s chairman. He also left the Tata group with Mr Mistry.

Darius is Anahita’s husband. Anahita Pandole, a well-known gynaecologist in Mumbai, was driving the car.

Cyrus Mistry, the youngest son of Pallonji Mistry, died on the spot.

The police are analysing the footage captured by all CCTV cameras in the area and the car is being investigated for any mechanical issues. They are also trying to retrieve data from a chip assembled in the vehicle – similar to a black box.

Decision On PoK Should Have Been Taken During 1971 Indo-Pak War: Rajnath Singh In Himachal

‘If Tea Seller Can Become PM, Why Can’t I Be A CM’

Tips for parents to prevent nail biting in kids | Health