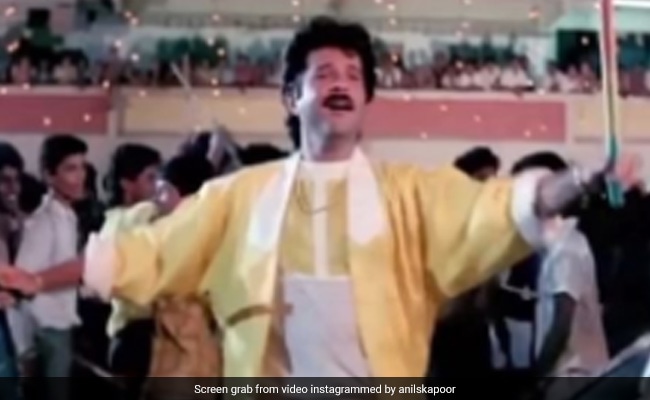 Anil Kapoor in a still from Tezaab. (courtesy anilskapoor)

Every year, during the festival of Navratri, Anil Kapoor reminisces a particular sequence from his 1988 film Tezaab. Any guesses? It’s the Dandiya song. The shot is one of his “favorite memories” of Navratri because it was filmed “smoothly and effortlessly” in just one night. On Monday, the actor shared a snippet from the N Chandra-directed film, in which he is seen sporting a yellow and white T-shirt, a matching jacket and white trousers. In the video, Anil Kapoor is playing dandiya to the beats of the song. He wrote: “Happy Navratri to one and all! This time of the year always takes me back to this scene from Tezaab, conceptualised so beautifully by N Chandra.”

Anil Kapoor added: “I’ll never forget how smoothly and effortlessly we shot this entire dandiya scene in one night. One of my favorite memories of this happy festival.”

Tezaab featured Anil Kapoor in the lead role alongside Madhuri Dixit. The other stars in the film were Chunky Panday, who celebrates his birthday today, Anupam Kher, Suresh Oberoi, Annu Kapoor and late actor Mahavir Shah. The film released on November 11 in 1988. The music for Tezaab,  one of the most iconic films of Bollywood, was composed by Laxmikant-Pyarelal. Some other songs from the Tezaab playlist that are still popular are Ek Do Teen and So Gaya Yeh Jahan.

In the comments section of Anil Kapoor’s post, fans expressed their love for the film. One user wrote: “My first Bollywood movie in theatre, and the movie which made me your fan” while another commented: “What a beautiful movie it was… Sir ji, your performances are always amazing.”

Anil Kapoor was last seen in JugJugg Jeeyo. He co-starred with Neetu Kapoor, Varun Dhawan, Kiara Advani and Prajakta Koli in the Raj Mehta directorial. His upcoming films include Fighter with Hrithik Roshan and Deepika Padukone, Animal with Ranbir Kapoor, and a Hindi remake of Tom Hiddleston’s series The Night Manager.