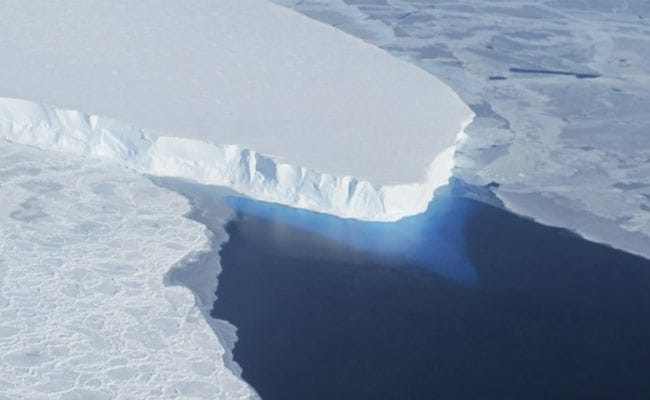 The Thwaites glacier in Antarctica is among the biggest glaciers in the world.

A glacier in Antarctica is melting at a faster rate than previously expected, scientists announced this month. In a new study, published in Nature Geoscience, they said that a sudden melting event occurred over the course of six months in the last , which caused the Thwaites Glacier retreat as much as 1.3 miles (2.1 kilometres) per year. That’s twice the rate that scientists have observed in the past decade or so, said the study. Thwaites is called the “doomsday glacier” because of the high risk of collapse and the threat to global sea level.

According to People magazine, the Thwaites glacier is about the size of Florida and accounts for around five per cent of Antarctica’s involvement in sea-level rise around the world.

Also Read | Swiss Glaciers Melting Faster, Have Shrunk By Half Since 1930: Study

“Thwaites is really holding on today by its fingernails, and we should expect to see big changes over small time scales in the future – even from one year to the next – once the glacier retreats beyond a shallow ridge in its bed,” said Robert Larter, a marine geophysicist who co-authored the study.

What Will Happen When Thwaites Disintegrates?

The scary new study has alerted us about the rapid disintegration of one of the biggest glaciers in the world. International Thwaites Glacier Collaboration, in an estimate released in 2020, had said that if the “doomsday glacier” dissolves fully, it will lead to four per cent of climate change-caused sea-level rise.

They had further said that a sudden collapse would raise sea levels 25 inches more.

Sea Level Rise Viewer, a web application developed by the National Oceanic and Atmospheric Administration (NOAA), allows users to see what the collapse of the Thwaites Glacier would look like.

The application shows the collapse of the glacier has the potential to devastate southern Louisiana and Mississippi. The effects will also be felt in New York, but Los Angeles would be spared.