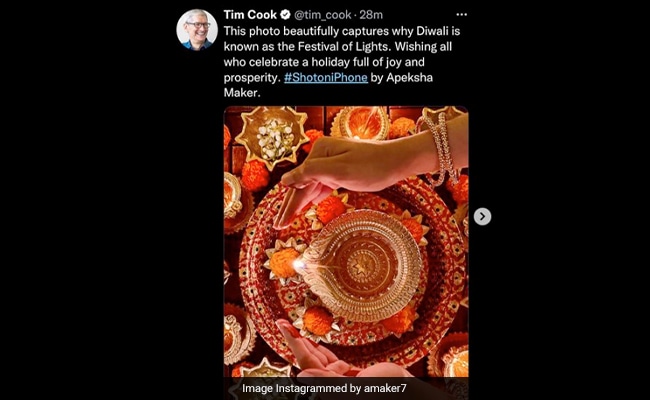 The image which was shot on an iPhone.

Apple CEO Tim Cook on Monday morning extended Diwali wishes to his followers and gave a shoutout to Mumbai-based photographer Apeksha Maker. Taking to Twitter, Mr Cook shared one of Ms Maker’s photos and said that the picture beautifully illustrated why Diwali is called the festival of lights.

The image, which was shot on an iPhone, showed ornated Diwali decorations. It featured a woman’s henna-decorated hands enclosing a ‘diya’ (earthen lamp).

This photo beautifully captures why Diwali is known as the Festival of Lights. Wishing all who celebrate a holiday full of joy and prosperity. #ShotoniPhone by Apeksha Maker. pic.twitter.com/BhUH1MkFfS

Apeksha Maker shared a screenshot of Mr Cook’s tweet on Instagram and said that she was “humbled” to see the Apple CEO share one of her pictures. “Humbled & stoked to have #TimCook @apple post my #shotoniphone image for Diwali! Wishing you all a prosperous one,” Ms Makar wrote on social media.

As per her Instagram bio, Ms Maker is a professional photographer who has worked with top brands and famous personalities, including Kiara Advani, Deepika Padukone and Anushka Sharma. She is also the founder of House Of Pixels.

Meanwhile, last month, Tim Cook also complimented a 9-year-old girl living in Dubai for designing an iOS app for iPhones. The girl, Hana Muhammad Rafeeq, had initially written to him claiming to be the youngest iOS developer. She had developed “Hanas,” a storytelling app that allows parents to record stories.

In response to her email, in which she described her app and other accomplishments, Apple’s CEO complimented her. Tim Cook wrote to her, “Congratulations on all of your impressive achievements at such a young age. Keep at it and you will do amazing things in the future”.