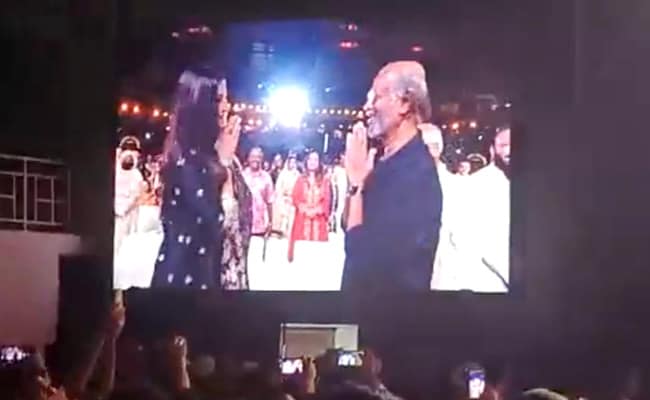 Ponniyan Selvan‘s grand audio and trailer launch event is being held in Chennai tonight, which is being attended by eminent film personalities. Actor Aishwarya Rai Bachchan, who will be seen playing the role of Nandhini attended the event. Aishwarya wore a black and silver ensemble. Veterans Rajinikanth and Kamal Haasan were also on the guest list. Many videos of Aishwarya and Rajinikanth greeting each other is going viral on social media. In one of the videos shared online, Aishwarya Rai Bachchan is seen touching Rajinikanth’s feet and hugging him at the event.

Check out the video:

Another video of our #Thalaivar#Rajinikanth entry at #PonniyinSelvan audio launch.

A stunning picture of Aishwarya Rai Bachchan from the event. Aishwarya will be seen playing the role of Nandhini, the Queen of Pazhuvoor in the film.

Aishwarya Rai Bachchan and Rajinikanth have previously worked in Tamil film Enthiran, which was also released in Hindi with the title Robot. The film, directed by S Shankar featured the two stars as a couple. Released in 2010, the film opened to positive reviews. Enthiran emerged as the highest-grossing Indian film of 2010.

The actress reportedly has signed an untitled film opposite Rajinikanth. This will mark their onscreen collaboration after years. However, neither Aishwarya Rai nor the makers of the film have confirmed her association with Rajinikanth’s upcoming project.

Aishwarya Rai Bachchan will be soon seen in Mani Ratnam’s Ponniyan Selvan, which is all set to release in theaters on September 30. The film will release in Tamil, Telugu, Malayalam, Kannada and Hindi. The film also stars Vikram, Trisha, Karthi, Jayram Ravi and Prakash Raj among others.