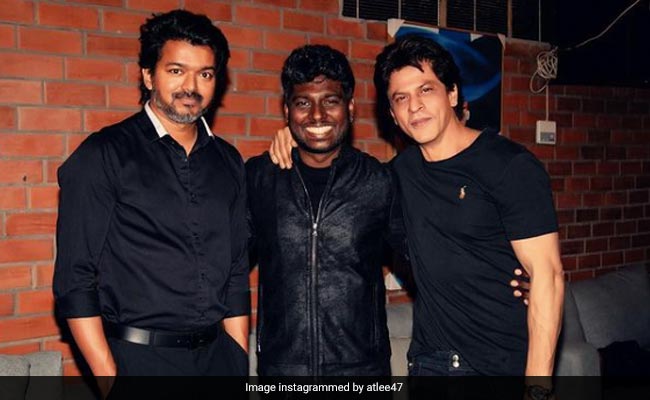 Atlee Kumar, who turned a year older yesterday (September 21) has shared a picture from his birthday celebrations posing with none other than superstar Shah Rukh Khan and Thalapathy Vijay. In the image, Shah Rukh, Vijay and Atlee are happily posing for the camera in all-black outfits. Calling Shah Rukh and Vijay his “pillars,” he wrote, “What more can I ask on my bday , the best bday ever wit my pillars my dear @iamsrk sir & ennoda annae ennoda #Thalapathy,” followed by heart emoticons. Soon after he shared the post, excited fans flooded the comment section. A fan wrote, “King of Bollywood and King of Kollywood,” while another wrote, “SRK & Vijay together in a frame.for the first time Superb Thank You Anna for this.”

What more can I ask on my bday , the best bday ever wit my pillars. My dear @iamsrk sir & ennoda annae ennoda thalapathy @actorvijay ❤️❤️❤️ pic.twitter.com/sUdmMrk0hw

Atlee is making his Bollywood debut with his forthcoming movie Jawan, starring Shah Rukh Khan and Nayanthara. The action thriller film also stars Sanya Malhotra and Priyamani in pivotal roles. A few months ago, he unveiled the teaser and first look of Shah Rukh Khan. Sharing the teaser, Atlee wrote, “Feeling emotional, excited & blessed . Grew up admiring you but never imagined that I would be directing you sir. @iamsrk & I proudly present to you #Jawan”

Jawan is slated to release next year on June 2 in five regional languages – Hindi, Tamil, Telugu, Malayalam and Kannada.

Meanwhile, on the work front, Shah Rukh Khan also has Pathaan with Deepika Padukone and John Abraham. The movie is slated to release next year. On the other hand, Vijay is busy shooting for his next Varisu with Rashmika Mandanna.