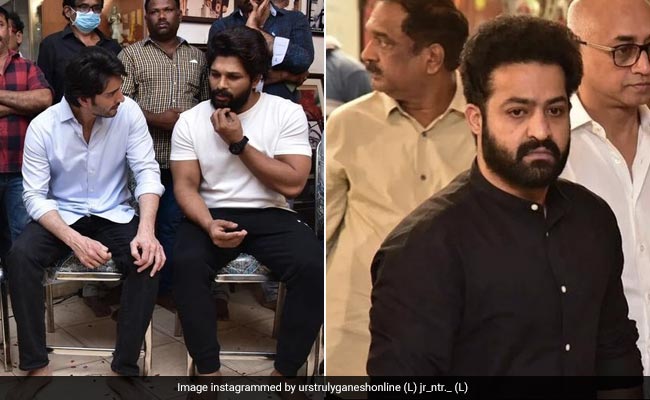 Superstar and Mahesh Babu’s father Krishna’s funeral was held in Hyderabad on Tuesday. Several stars, including Chiranjeevi, Pawan Kalyan, Allu Arjun, Jr NTR, Ram Charan, Vijay Deverakonda, Venkatesh Daggubati and Naga Chaitanya, arrived to pay their last respect at the funeral. The legendary actor, 79, died on November 15. He was undergoing treatment at a hospital following a cardiac arrest. In the early hours of Monday (November 14), Krishna was admitted to the hospital and put on a ventilator.

Krishna was an actor, director and producer known for his works in Telugu cinema. In a career spanning five decades, he featured in more than 350 films, such as Sakshi, Pandanti Kapuram,  Gudachari 116, Guduputani and Devadasu, to name a few. He is survived by his son Mahesh Babu and three daughters, Padmavathi, Manjula and Priyadarshini.

A few months ago, in September, Mahesh Babu’s mother, Indira Devi, died at the age of 70 due to illness, as per news agency PTI. Mahesh Babu and his wife Namrata Shirodkar dropped emotional posts on their respective Instagram profiles.

Mahesh Babu shared a younger photo of her mother and dropped heart emoticons in the caption. Namrata, on the other hand, wrote a long note that read, “We will miss you deeply… You’re in my memory and all the love you gave me.. I will shower on your son and your grandchildren and more…We love you mummy…Sending you endless love and light.”