Dressed in all black, Congress leaders took to streets on Friday as they held a nationwide protest against price rise, unemployment, and the Goods and Services Tax (GST) hike on essential items. However, the Congress’s plan to ‘gherao’ Prime Minister Narendra Modi’s residence was foiled by the Delhi Police as officials initiated a crackdown on protesters.

Meanwhile, the Bharatiya Janata Party raised questions over why the Congress chose August 5 to hold the protest. The BJP leaders also slammed the Congress’s black attire, alleging that it is to convey opposition to Ram Mandir.

HERE ARE THE TOP DEVELOPMENTS IN THE STORY:

From Delhi to Assam to Madhya Pradesh and Telangana, the Congress workers hit the streets across the nation as they heeded the top leadership’s call for mass protest against price rise and unemployment. In Delhi, several Congress MPs including former party president Rahul Gandhi staged a protest in the Parliament House complex and took out a march towards the Rashtrapati Bhawan as part of their nationwide stir.

The protesting MPs raised slogans against the government demanding that the GST hike on essential items be withdrawn, with party chief Sonia Gandhi standing with the women MPs of the party holding a banner outside Parliament gate.

In Assam, the Congress attempted to gherao the Raj Bhavan at Guwahati as they held demonstration on Friday. In Madhya Pradesh, the protesters tried to march to the Raj Bhawan to hand over a memorandum of demands to the Governor, but were stopped by the police. Hundreds of Congress workers were detained across the country as they organised protest against the government on Friday. The Delhi Police detained more than 200 Congress protesters, including 50 Members of Parliament, from Lutyens’ Delhi. Congress leaders Rahul Gandhi, Priyanka Gandhi Vadra, Deepender S Hooda, and Adhir Ranjan Chowdhury were among those detained by the police in Delhi. 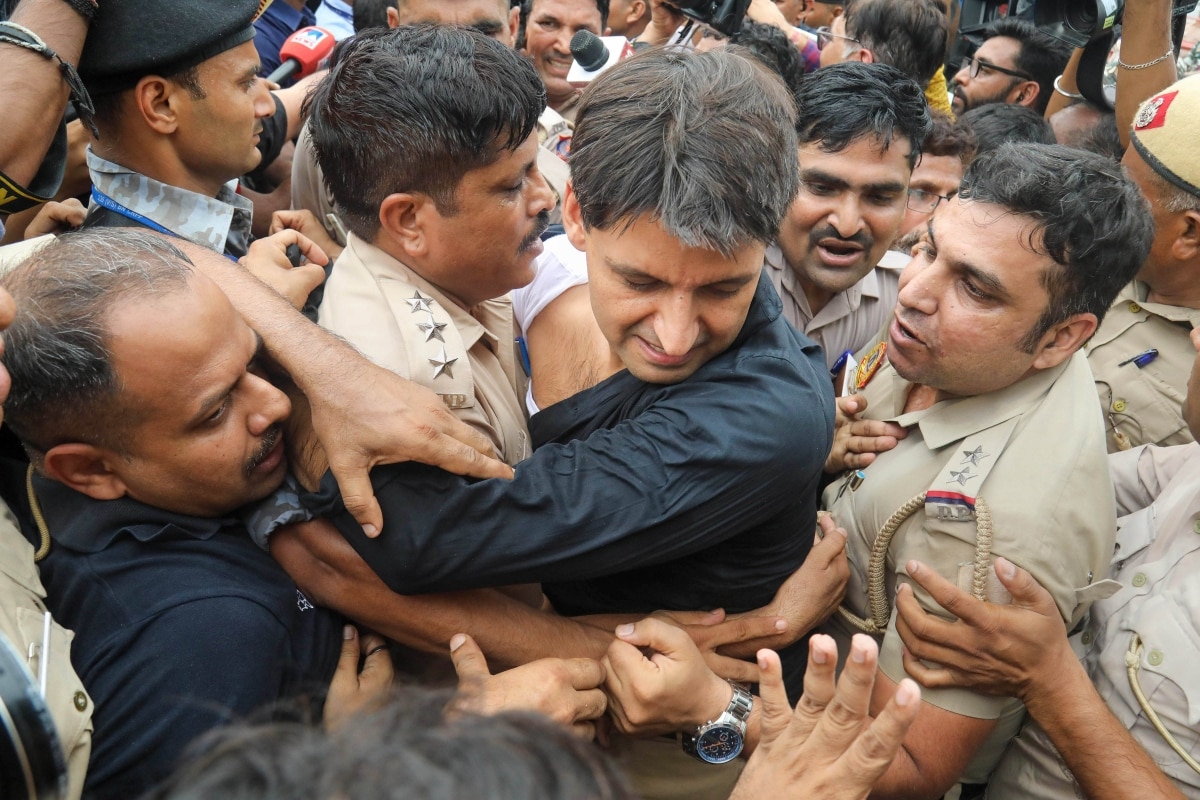 In Bihar, more than a hundred Congress workers, besides some senior leaders, were rounded up by the police on Friday.

Police had put up barricades on the routes leading to the Raj Bhawan, the official residence of the governor, from the Uttar Pradesh Congress Committee (UPCC) headquarters in UP.

Ahead of the Congress’s nationwide protest, Rahul Gandhi addressed a press conference at party headquarters in Delhi. Rahul Gandhi alleged that India is witnessing the “death of democracy” and anybody who raises people’s issues and stands against the onset of dictatorship is “viciously attacked” and put in jail.

“What we are witnessing is the death of democracy. That is what India is witnessing. What India has built brick by brick, starting almost a century ago, is basically being destroyed in front of your eyes,” Rahul Gandhi said. Rahul Gandhi and Priyanka Gandhi with Congress leaders after being detained by police. (PTI Photo)

“All of you know it, all of India knows it. Anybody who stands against this idea of the onset of dictatorship, does not matter who he is, where he comes from, which state, which religion, male or female, that person is viciously attacked, put in jail, arrested, beaten up,” Rahul Gandhi said.

The idea is that people’s issues, whether they are price rise, unemployment, violence in society, must not be raised, Rahul Gandhi said, alleging that the more he raises people’s issues and speaks the truth, the more he will be attacked.

Meanwhile, the BJP attacked the Congress over holding protest on August 5 and wearing black clothes.

Home Minister Amit Shah linked Congress leaders’ protest in black clothes to the party’s “appeasement” politics, claiming that it was to convey its opposition to the Ram temple foundation laid by Prime Minister Narendra Modi on this day in 2020.

“Congress chose this day for protest and wore black clothes because they want to give a subtle message to further promote their appeasement politics because on this day itself PM Modi laid the foundation of Ram Janambhoomi,” Amit Shah said.

Uttar Pradesh Chief Minister Yogi Adityanath alleged that the Congress protesting in black clothes is an “insult to Ram bhakts”.

“Till now, Congress was protesting in normal attire, but today, they protested wearing black clothes. It’s an insult to Ram bhakts. They chose this day as today’s Ayodhya Diwas which marks the beginning of construction of Ram Janambhoomi,” Uttar Pradesh Chief Minister Yogi Adityanath said.

(With inputs from PTI)