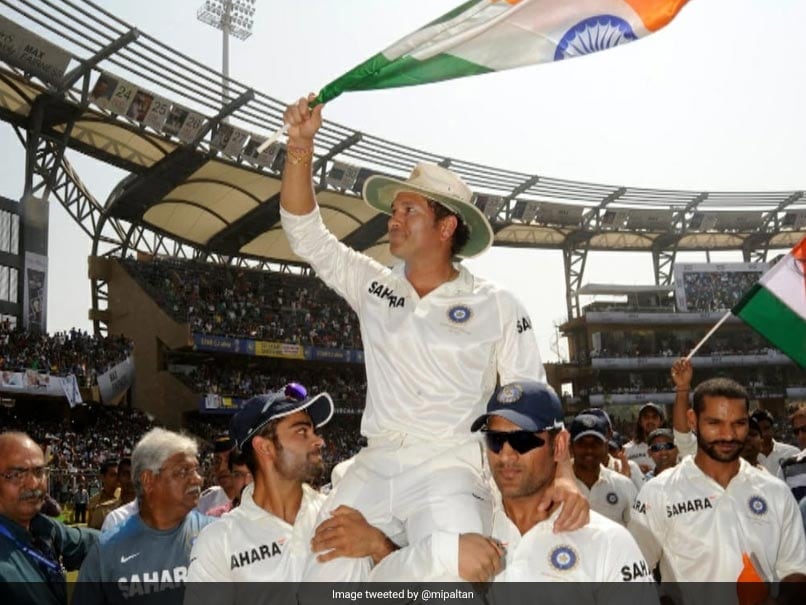 On this day, nine years ago, Master Blaster Sachin Tendulkar announced his retirement and bid goodbye to international cricket. Remembering the same, the Board of Control for Cricket (BCCI)  in India has shared a video on its official Twitter account. In his two-decade long career, Tendulkar played 664 international cricket matches in total, scoring 34,357 runs across all formats of the game.

The legend retired after his 200th Test, which India played against West Indies in his home ground Mumbai, on November 16, 2013. After the match, Tendulkar gave a speech at the Wankhede Stadium, which left everyone present in the stadium and those sitting in front of a television set, teary-eyed. The entire stadium could be seen chanting “Sachin, Sachin”.

In the emotional video, Tendulkar is heard saying, “Time has flown by quickly, but the memories you have left with me, will always be with me forever and ever and especially the chant of ‘Sachin Sachin’ which will reverberate in my ears till I stop breathing.”

On this day in 2013, the Master Blaster @sachin_rt bid adieu to international cricket.

Relive his emotional speech that moved everyone, here – https://t.co/bAVfiAEcaP#Legend#SRTpic.twitter.com/hhtwWfzExs

The BCCI captioned the video as, “On this day in 2013, the Master Blaster @sachin_rt bid adieu to international cricket. Relive his emotional speech that moved everyone, here.”

Since being shared, the video has amassed over 24,000 likes and 4,000 retweets. Many cricket fans became nostalgic as they recalled this day.

“On that day, 15 years old me couldn’t control my tears and cried so much. Today, 20 year old me, trying to control my tears but it just won’t stop. Sachin gave us emotions we never knew we had. It was beyond belief what he meant to us fans,” wrote one user.

“Whenever watching gets goosebumps,  that’s the love & craze on u mannn luv yu lots,” said another one.

A fourth added, “Cricket is a religion and Sachin is it’s God..nd alwasys will be. Thanks Sachin Paji for all doz beautiful memories. @sachin_rt”

“That memorable moment of Sachin chants and the last signoff on the cam lens…..Tears,” said another one.