“Johar! Namaskar”, began Droupadi Murmu’s first tweet after she was sworn in as the 15th President of India on July 25, 2022. Murmu – the first tribal, second woman and the youngest person ever to become the country’s First Citizen – said on Twitter that trust and support will be the greatest strength in discharging her responsibilities.

While the President used the microblogging site to address the country, some netizens were busy on the platform sharing a photo of Murmu with her predecessor Ram Nath Kovind alongside an atypical claim. They claimed the duo participated in a “Vedic ritual” before heading for the official formalities of power transfer.

“The feelings and emotions of these moments associated with the transfer of power create history. The political formalities for the new President’s takeover can wait. But the Vedic rituals are being prioritized,” a user wrote while sharing a photo of Kovind and Murmu purportedly attending a ritual at a temple.

Similar claims have been archived here and here. 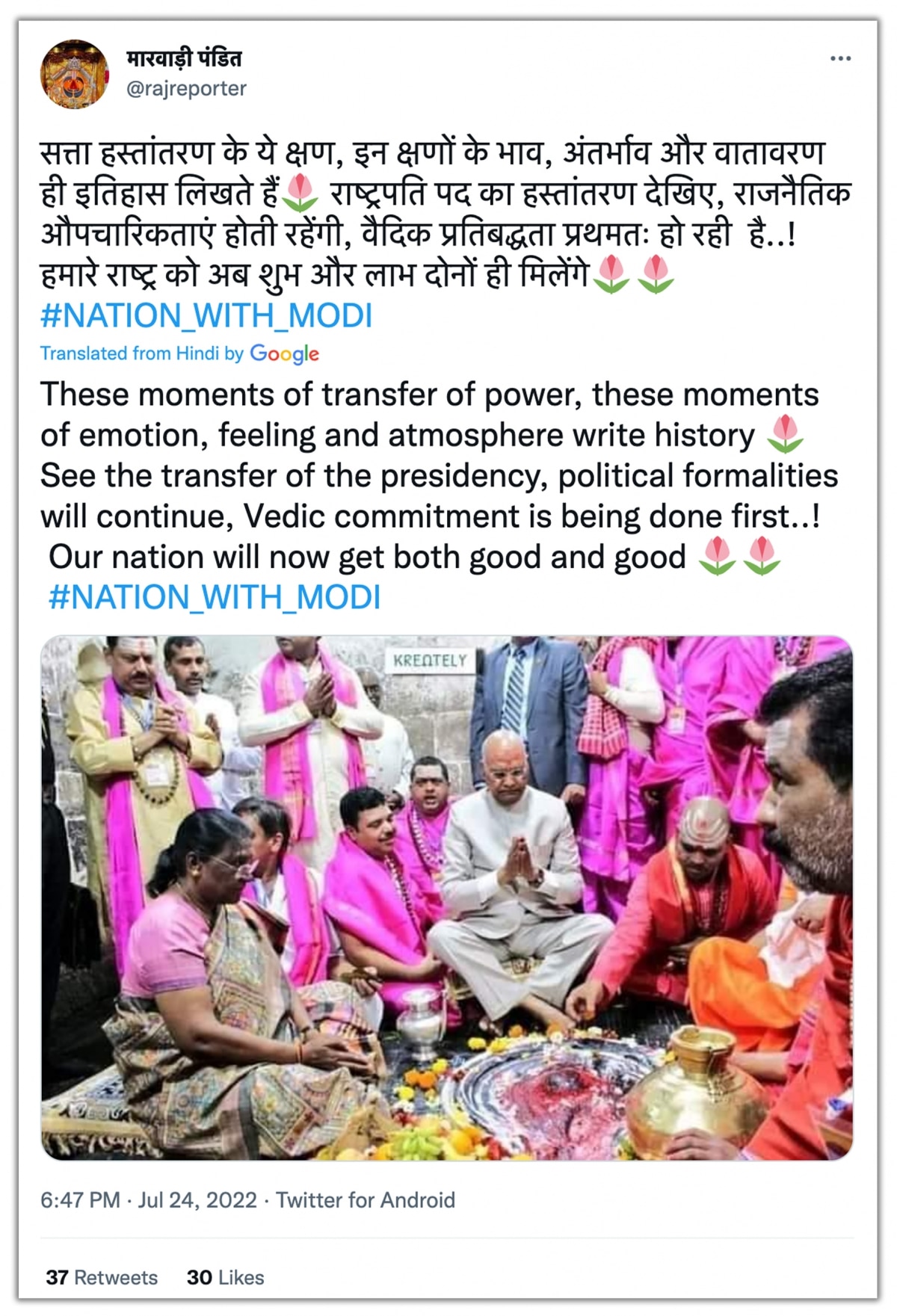 The India Today Anti Fake News War Room (AFWA) found the claim was misleading. This photo was taken in Jharkhand’s Deoghar in 2020 while Kovind was on an official visit. Droupadi Murmu was the then Governor of Jharkhand.

We couldn’t find any news reports on Kovind attending a ritual in Murmu’s run-up to taking office. So, we ran a reverse search of the photo on Google.

This led us to a few news reports from February 2020 about Kovind offering prayers at the Baba Baidyanath Temple in Jharkhand’s Deoghar.

A Hindi article on ‘lenseyenews.com‘ used a similar photo in their report published on February 29, 2020. 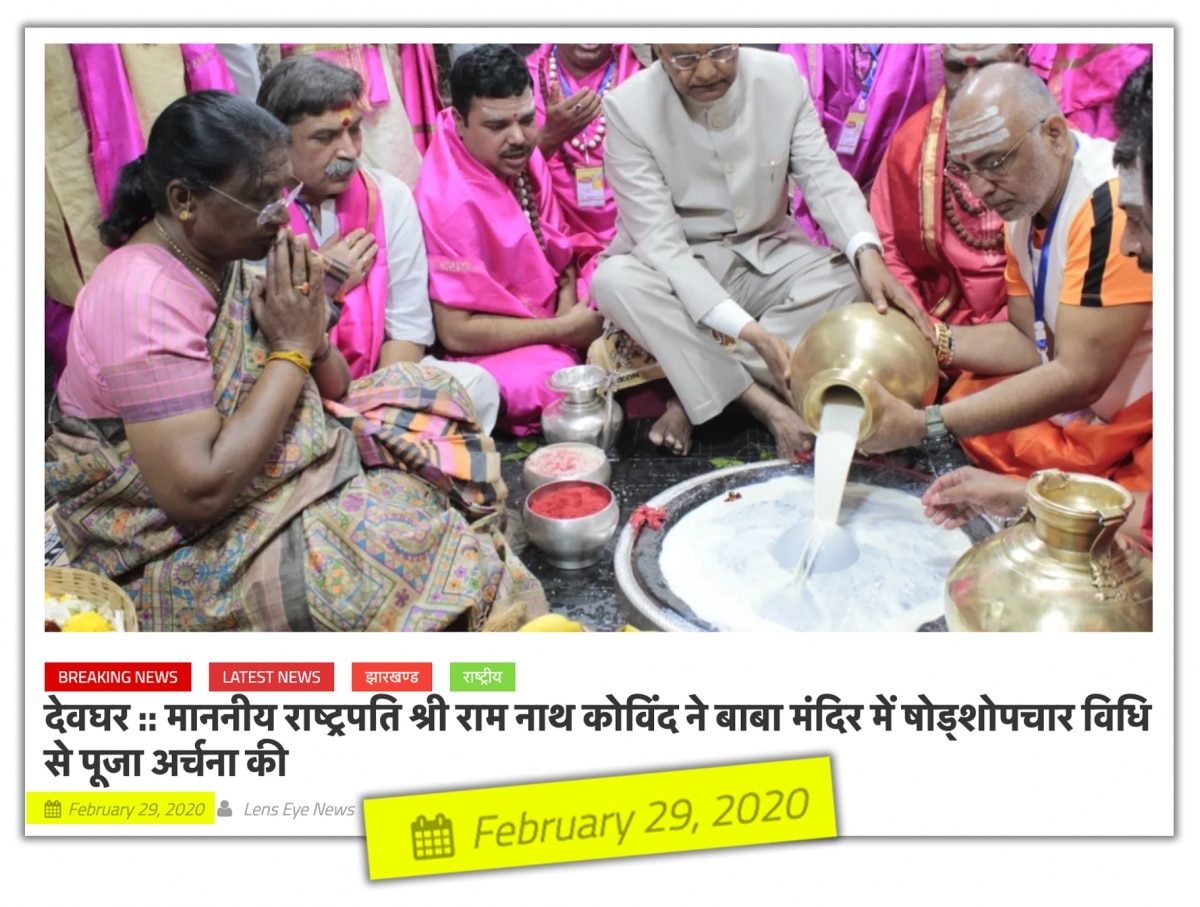 Another Hindi news portal called ‘prabhatkhabar.com‘ had used the now-viral photo alongside their article from the same date. ‘President Ram Nath Kovind worshipped Baba Vaidyanath in Deoghar’, the English translation of the story’s title read. The report also confirmed Governor Murmu’s presence at the temple. 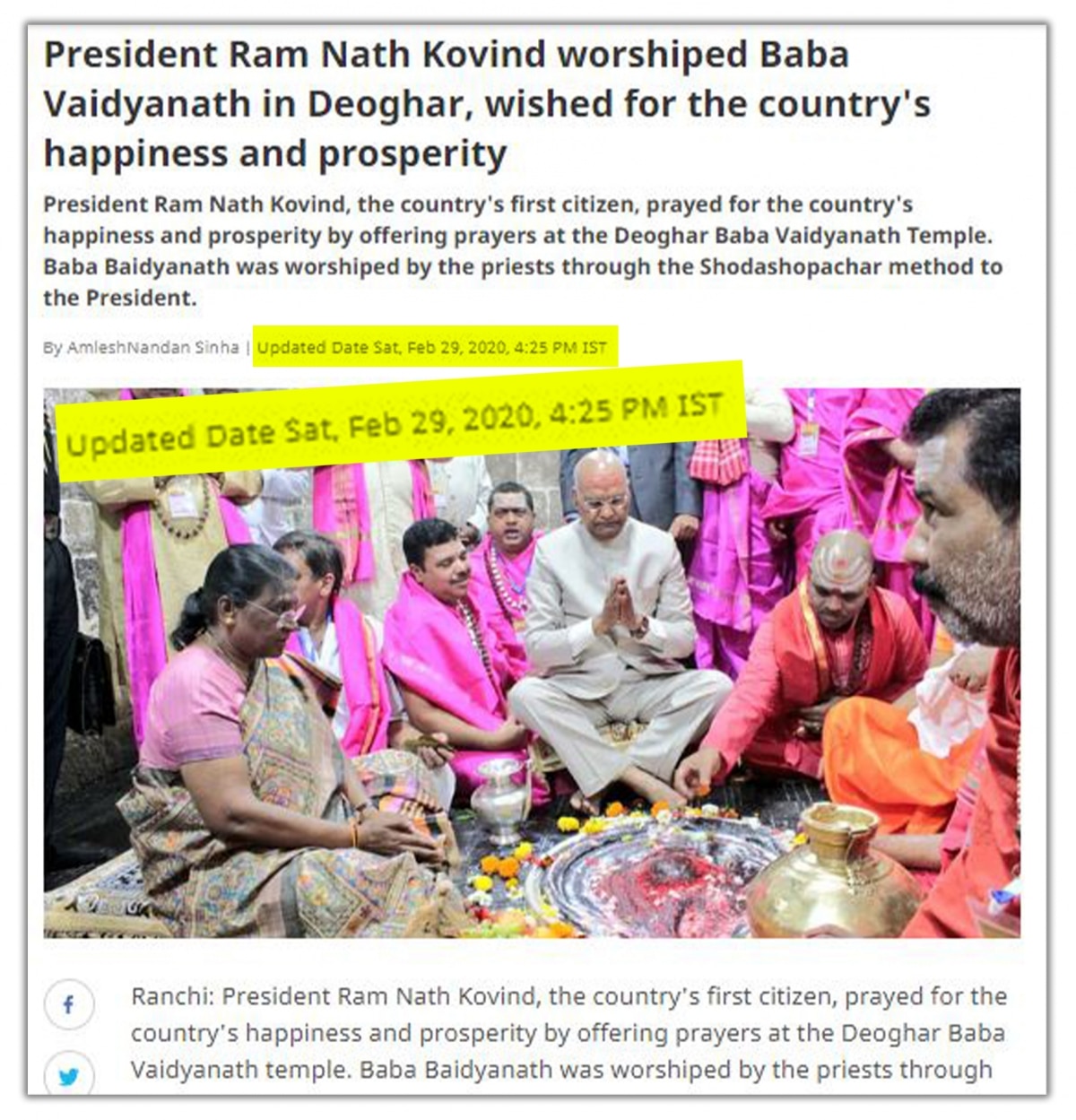 The same image was included in a ‘Bhaskar’ report that covered Kovind’s Jharkhand tour.

Ram Nath Kovind was in Jharkhand for a two-day visit on February 29 and March 1. Per reports, his destinations included Ranchi, Deoghar and Gumla.

A keyword search also revealed that the Deoghar District Administration had tweeted a video of the event during which the photo in question was taken from their verified handle on February 29.

The official handle of the Indian President had tweeted a photo of Kovind from the temple in which he was seen donning the same attire as in the viral photo.

Hence, it is clear that a two-year-old photo of Ram Nath Kovind and Droupadi Murmu attending a ritual at a Jharkhand temple is being shared with a false claim.

(With inputs from Sanjana Saxena in New Delhi) 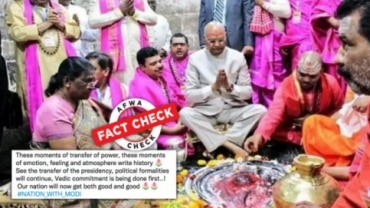 ClaimOutgoing Indian President Ram Nath Kovind and his successor Droupadi Murmu took part in a Vedic ritual ahead of the official takeover ceremony.ConclusionThe image was taken when Kovind visited Jharkhand’s temple town of Deoghar in 2020. Murmu, who was the then Governor of the state, was also present.

The number of crows determines the intensity of the lie.