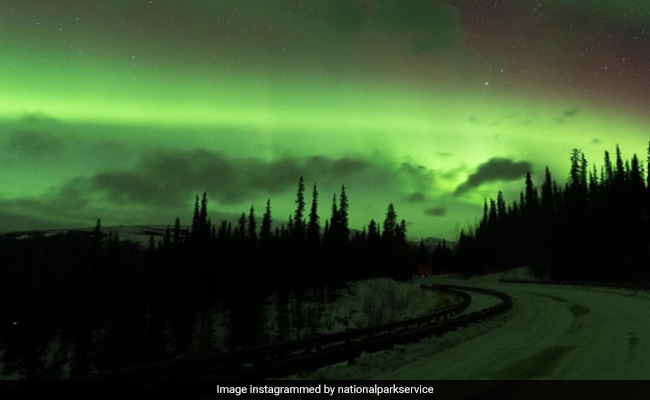 The aurora borealis occurs when coronal mass ejection interacts with elements in the earth’s atmosphere.

The National Park Service (NPS) of the United States shared images of the Aurora Borealis that lit up the sky over Denali, the highest mountain peak in North America. In the caption, the federal agency also provided a thorough description of the auroras.

Using a famous Simpsons joke as a point of reference, the NPS wrote, “Aurora Borealis!? At this time of year, at this time of day, in this part of the country, localized entirely within your kitchen!? – Super Nintendo Chalmers”.

“Denali is a great location for viewing the aurora because it’s located at a far northern latitude and because there is very limited light pollution. Light pollution is found in towns, cities, and other developed areas where excessive artificial light brightens the natural environment,” according to the agency.

“The most common colour seen in the Northern Lights, or aurora borealis, is green. When the solar wind hits millions of oxygen atoms in the Earth’s atmosphere at the same time, it excites the oxygen atoms for a time and then they decay back to their original state, when they emit the green hue we can see from the ground,” they added.

Look at these captivating images:

What Exactly Is an Aurora, and What Causes It to Occur?

According to NASA, if you’re ever near the North or South Pole, you may be in for a very special treat. Frequently there are beautiful light shows in the sky. These lights are called auroras. If you’re near the North Pole, it is called an aurora borealis or northern lights. If you’re near the South Pole, it is called an aurora australis, or the southern lights.

Auroras are actually caused by the Sun. The Sun sends us more than heat and light; it sends lots of other energy and small particles our way. The protective magnetic field around Earth shields us from most of the energy and particles, and we don’t even notice them.

But the sun doesn’t send the same amount of energy all the time. There is a constant stream of solar wind, and there are also solar storms. During one kind of solar storm called a coronal mass ejection, the sun burps out a huge bubble of electrified gas that can travel through space at high speeds.

When a solar storm comes toward us, some of the energy and small particles can travel down the magnetic field lines at the north and south poles and into Earth’s atmosphere. There, the particles interact with gases in our atmosphere, resulting in beautiful displays of light in the sky. Oxygen gives off green and red light. Nitrogen glows blue and purple.