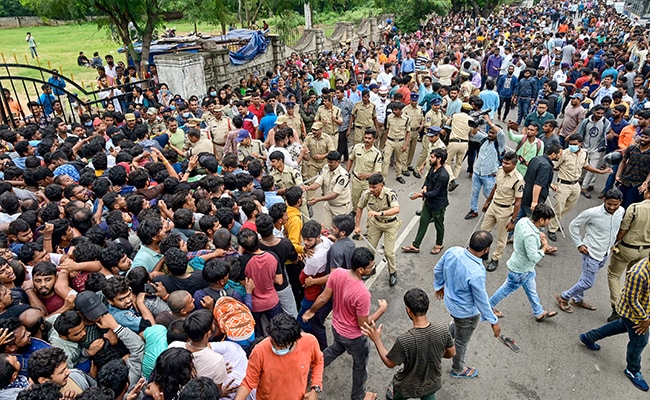 The Hyderabad Cricket Association headed by former India captain Mohammad Azharuddin has been accused of criminal negligence and is facing police action after this morning’s stampede at the Gymkhana grounds, sources said. Four people were injured in the stampede, which broke out as frenzied fans jostled for tickets to the third T20 match between India and Australia.

The India and Australia match will take place at the Rajiv Gandhi International Stadium, Hyderabad, on September 25.

Around 15,000 people had gathered at the ground, some of them had arrived early in the morning, reported news agency Press Trust of India. But the situation spun out of control and a stampede broke out. The police used batons to disperse the crowd and restore control.

The injured persons, two women among them, were taken to a hospital and are fine, the police said. A woman had lost consciousness and a policewoman had to perform CPR (cardiopulmonary resuscitation), on her, the police said.

Mr Azharuddin, who described the incident as unfortunate, said Hyderabad has been allotted a match after a long time. It should be ensured that the “game goes forward”, he said, reported PTI.

Hyderabad is hosting an international cricket match after more than two years, which accounted for the rush.

Earlier today, Telangana Sports Minister V Srinivas Goud had held a meeting with government officials and Mohammad Azharuddin, who is the chief of the Hyderabad Cricket Association.

Mr Goud said the incident could have been averted had the HCA sought the government’s cooperation without acting unilaterally. He said a sound and transparent system should be followed in future to avoid recurrence of such incidents, reported PTI.