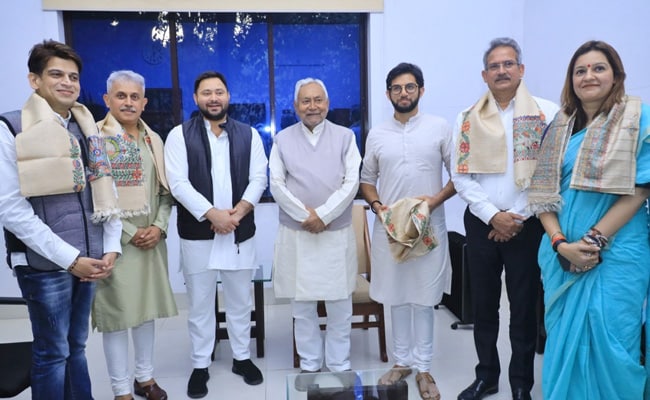 A delegation from Team Uddhav Thackeray, led by his son and former Maharashtra minister Aaditya Thackeray visited Patna today for a meeting with Bihar Chief Minister Nitish Kumar and his deputy Tejashwi Yadav.

The visit was seen as an ice-breaker of sorts between the two youth leaders — Mr Thackeray and Mr Yadav. Though they had several telephonic conversations, this was their first physical meeting.

Shiv Sena leader Aditya Thackeray said after meeting Patna-Nitish Kumar “Nitish ji and Tejashwi ji are doing a good job,” Aaditya Thackeray told the media after their 30-minute meeting. “If all of us young leaders keep talking among ourselves, we will be able to do good in the country… This friendship will go ahead (Yeh dosti aage chalegi), we both are in for the long haul ,” he added.

“It is great when young people get into policy making and decision making. It is a matter of great joym,” added Tejashwi Yadav.

The courtesy visit comes days ahead of the crucial civic elections in Mumbai and is expected to be good optics for the Team Thackeray. A chunk of voters for the civic polls in Mumbai and its suburbs are migrants who are from Bihar.

Despite the traditional son-of-the soil stance of the Shiv Sena dating from the days of party founder Balasaheb Thackeray, the Uddhav Thackeray government had accumulated considerable goodwill for looking after the migrants during the Covid pandemic.

The good optics with Mr Kumar and Tejashwi Yadav, who are also mass leaders in Bihar, are expected to add to it.

The Team Thackeray is trying to retain control of Brihanmumbai Corporation, the richest civic body in the country. But the task will be challenging given the split within the party that took place in June and brought the Uddhav Thackeray government crashing.

In his address to the reporters, Tejashwi Yadav today referred to the split, brought about by the BJP-backed rebellion of current Chief Minister Eknath Shinde.

“The government was toppled in Maharashtra through money power. But we taught a lesson to the BJP in Bihar,” he said. “Aditya and we are young people will take everyone along… Peace and, progress in the country are our agenda,”  he added.