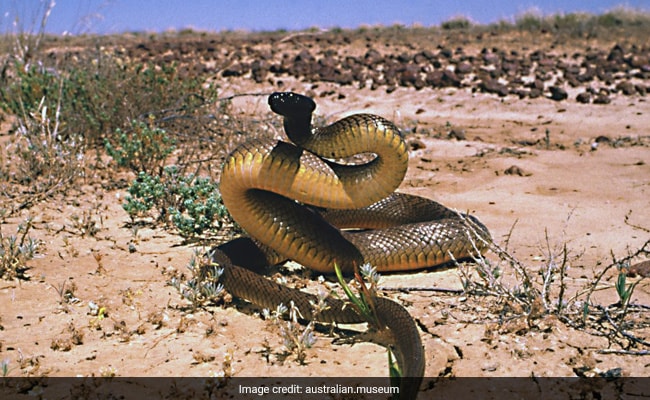 A snake is a reptile with a long, thin body but no legs. They move around by dragging their bodies in the form of loops. The slithering movement can send shills down to spine of anyone, even though it’s a known fact that out of 600 venomous species, only 200 are able to kill or significantly harm a human being. The Inland Taipan, found predominantly in Australia, tops the list of venomous snakes and it’s advisable to stay away from it.

According to Australian Museum, the Inland Taipan is called the Fierce Snake and is often cited as the world’s most venomous snake.

It is a medium to large snake, with a robust build and a deep, rectangular-shaped head. They are most active in the early half of the morning, briefly basking and foraging in or near deep soil cracks and animal burrows, before retiring to shelter for the rest of the day, said the museum website.

How deadly is its venom?

The snake venom is measured on the LD50 scale of poisonousness. It determines the potency of a snake’s venom. According to the website of the School of Chemistry, University of Bristol, the Inland Taipan is at the top of the Most Deadly Snake List.

It has the most toxic venom of any snake. The School of Chemistry said that the maximum yield recorded (for one bite) is 110mg. This means a single bite would probably be enough to kill over 100 people or 250,000 mice.

The Inland Taipan is virtually unknown in outside of Australia.

Inland Taipans are rarely encountered in the wild by the people because of their remoteness and brief above-ground appearance during the day.