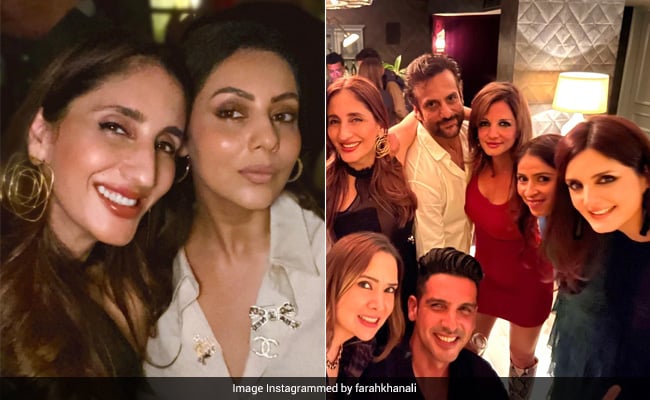 Farah Khan Ali has treated us with some inside pictures from Chunky Panday’s 60th birthday bash, which was held on Saturday. In the images, the first image is a group picture in which we can see Farah with sister Sussanne and brother Zayed Khan. The images also include Fardeen Khan, Bhavana Panday, and Sussanne’s boyfriend, Arslan Goni. In the other images, we can see Farah Khan, Kanika Kapoor, Pragya Kapoor, Deanne Panday (Chunky’s sister), and Alvira Khan (Salman Khan’s sister).  It seems, Shah Rukh Khan’s wife, Gauri Khan, also attended the bash as Farah shared a selfie with her. In the images, the birthday boy looks uber cool in a black and blue shirt paired with jeans.

Sharing the post, Farah Khan Ali wrote, “Thank you Bhavana Pandey and Chunky Panday for a rocking last night. It was a wonderful reunion of meeting friends I had not met in ages. Super fun,” followed by a heart emoticon.

Zayed Khan has also shared a similar group picture, including Pragya Kapoor, on his Instagram handle but with a different caption. He wrote, “Hello people , last night was a real blast from the past with the OG’s of our industry . A lovely evening with dear friends and friend like family. Thanks @bhavanapandey and @chunkypanday for a your infectious warmth and hospitality. Big hug . #bollywood #parties #friends @avigowariker thanks for taking this awesome pic . Big hug brother.”

Chunky Panday, who will be celebrating his 60th birthday on September 26, hosted a star-studded bash at his residence. The bash was attended by Salman Khan, Shah Rukh Khan’s son Aryan Khan, Karan Johar and others.