There’s no one like Jackie Shroff. His inimitable nonchalance and style is indelible and his attitude is what makes all the difference. In this week’s Big Interview we catch-up with the original Bhidu of Bollywood, the A-lister who never had a problem with playing second fiddle. Whether it was the peak of his career during the 80s and 90s or as recently as Akshay Kumar’s Sooryavanshi, Jackie never had a problem being the supporting role or the antagonist. Even when his solo films were dominating the marquee, he had no qualms in playing off his contemporaries like Anil Kapoor and Sanjay Dutt. As he recalls his early years, his days of meeting producers at his chawl in Teen Batti and his associations with the likes of Dev Anand, Shah Rukh Khan, Sanjeev Kumar, Jackie engages in frank talk that’s both unfiltered and balanced all at the same time. Excerpts…

You have often spoken about your admiration for Dev Anand, who you did your first film Swami Dada with. Did you pick up any of his mannerisms, his style or his flirtatious persona?
When I used to act, during the early films, I had a lot of him in me. When I used to sing a song, I always felt Dev saab around me. My mother used to make my hair like Dev saab, so right from childhood I liked him. It’s almost automatic that there will be some mannerisms of him in me, for sure.

Your first film as the main lead was Hero in 1983, a debut with the likes of Shammi Kapoor and Sanjeev Kumar. What are your memories of sharing screen space with the legends?
They were like my superheroes standing in front of me. I had no idea how to react, I was just myself, the way I am, and they accepted me like their family. They made me feel comfortable. With Shammi Kapoor, I know Aditya Raj Kapoor, his son. He is my friend. So I used to go to his house and for me they were like a family for sure. But with Hari Bhai (Sanjeev Kumar) it was like ‘Wow!’. He spoke to me in Gujarati and that’s how we broke the ice, Bindu ji was there as well. I thought they were all so beautiful they opened their arms for a person who had just walked in. That’s why I feel love for all the newcomers and I treat them like my kids. Is it true, that after you became a star, you continued to live in your chawl, and filmmakers would come to your house to give you film narrations?
Yes, they used to come and narrate scripts to me in my chawl, sitting outside on a drum, which I had made like chairs. If I had to answer nature’s calls, they would wait there sitting for me, while I would go to the potty or have a shower. I stayed in my chawl till 4-5 years after my first film was released. I felt happy there. And all my friends used to come, my mother used to cook for them, they used to love her food. 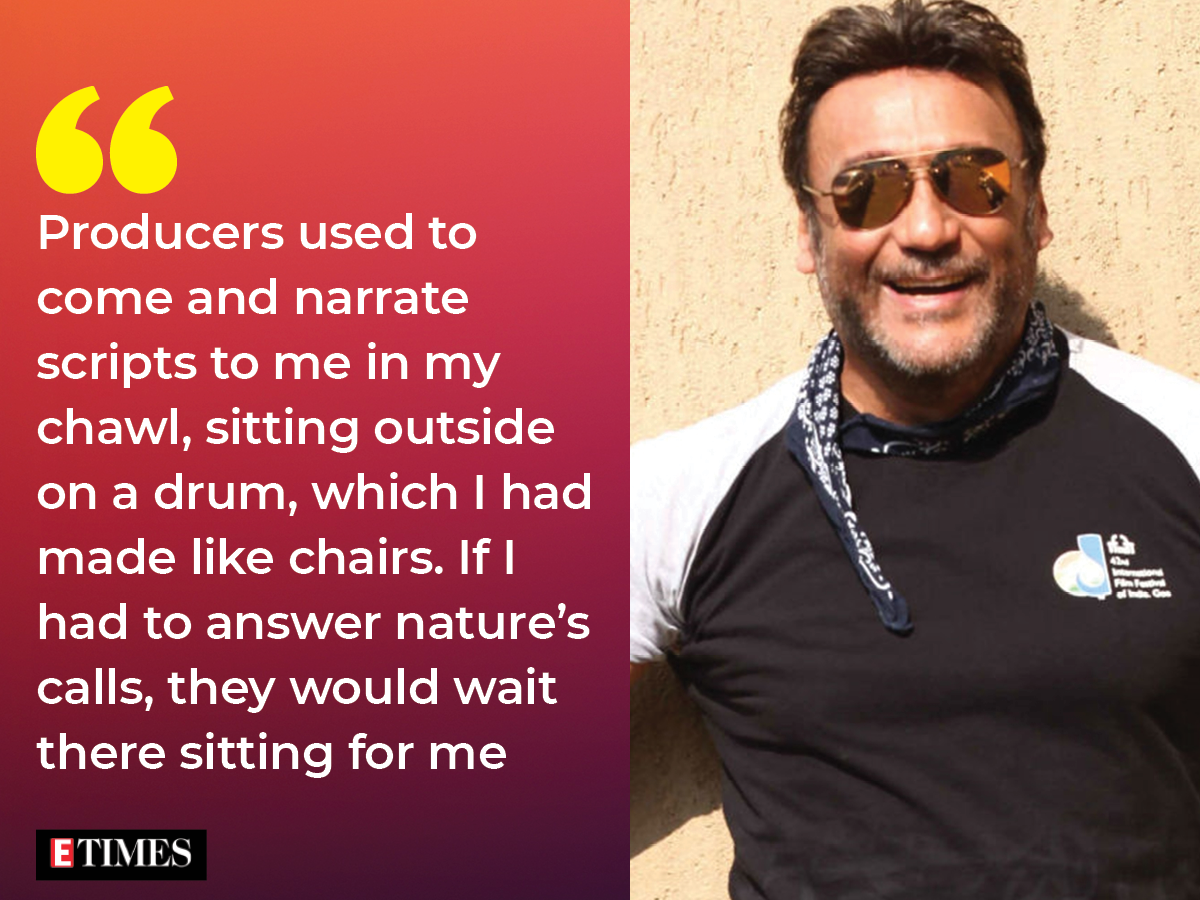 Recently Anil Kapoor confessed that most of the fans would come to take your autograph, but you would slide it over to him first to sign, even when Shah Rukh Khan was a newcomer in King Uncle, you would push him ahead to take photographs with fans, and announce that he is the next big thing…
I’m lucky, these have been my friends. Anil is my senior, Shah Rukh is my junior, but for me senior-junior never mattered, they were all my friends, my colleagues. And it was so embarrassing to sign ahead of anybody, because Anil Kapoor is my senior, he may say anything… that people didn’t come to him, but he is my senior, so he has to sign first and then I will sign. He’s my darling.
Dono jaan hai mere, mile na mile, jab milenge toh aisa milenge ki kuch hua hi nahi (They’re both my friends for life. Whether we meet or not, when he catch-up it’s like we met just yesterday). So we are like buddies, who don’t have to sit, and meet and call each other for any function or anything. When we are together, it’s always beautiful. 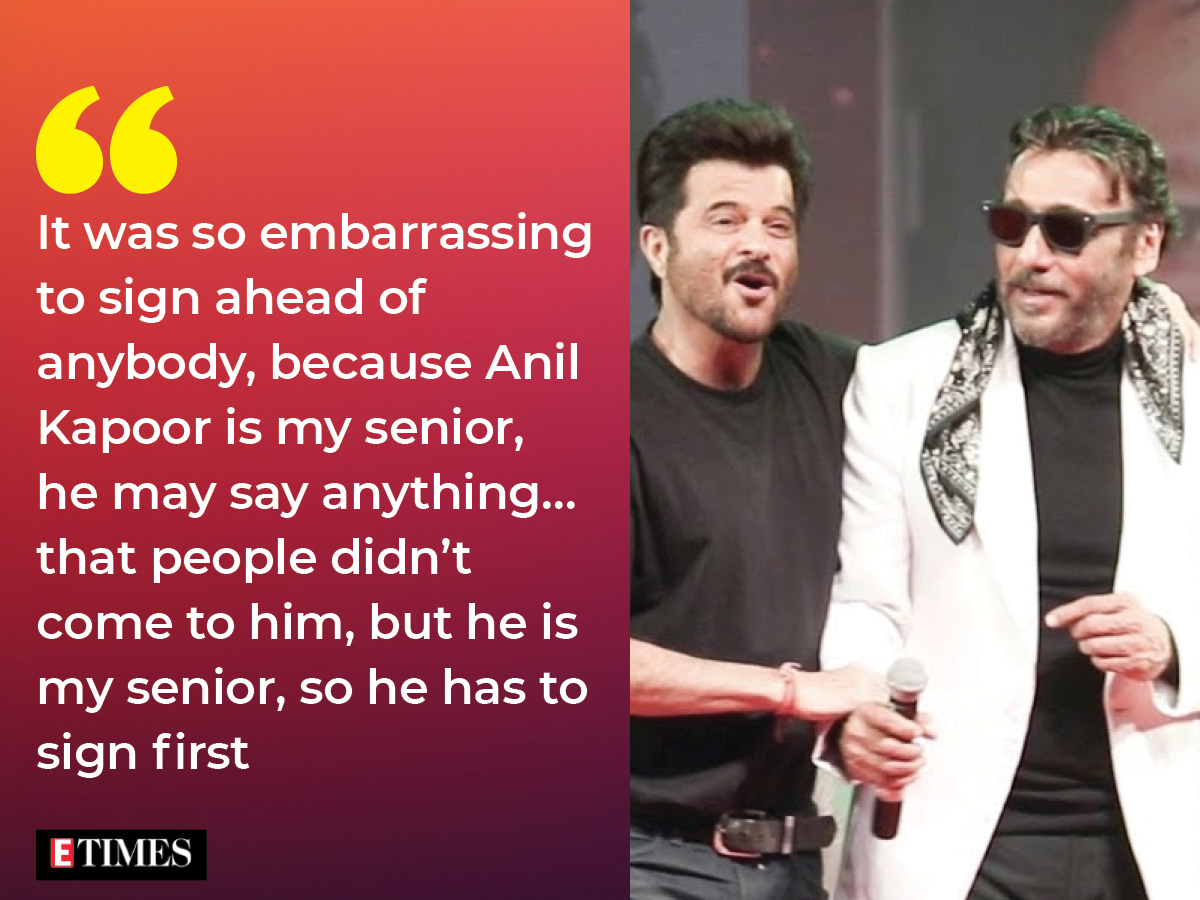 Sanjay Dutt recently said in an interview with ETimes that actors in today’s day and age are too insecure to share screen space when compared to your time in the 80s and 90s. What’s your take on that?
I think they are still doing three-hero films and two-hero films. As for insecurity, some people have it for sure, some people don’t care, but Sanju baba and I, we never had any issues with each other.
Lines agar tough ho jata tha, then I would say tu hi bol de (When the dialogue used to be tough, I used to let him say them). I used to tell Baba, I can’t remember this line, why don’t you say it and then Subhash Ghai used to come in and say, ‘Director main hoon, tum nahi’. We had no issues and I think even nowadays, there are people working in two-hero, three-hero films, these things are happening. My son is doing Bade Miyan Chote Miyan, with Akshay Kumar, so people are working in two-hero films.
Insecurity toh rahegi chhote, kissi kissi ko hota hai, kissi kissi ko nahi hota hai (Insecurity is obvious in our profession, some have it some don’t), that’s a normal feeling.
Job pe jate hai teen chaar jan, toh dekhenge ki uska kaam achha hai, mere nahi, woh insecurity toh rehti hai (In our job, 3-4 actors work in proximity and then they notice the other person is doing much better, that’s when insecurity kicks in).
Kisi ke pair kaatke, apneko lamba nahi bananeka (You can’t get higher by pushing others down), just compliment each other and you’ll be beautiful.
Ek dusre ko understand karke chalein toh zindagi achhi chalti hai (Life works smoother when people compliment each other). On the big screen as well, compliment each other,
uska scene hai toh the way he is saying it, you have to react, if he slaps you, you have to take the slap,
insecurity toh apne mein tha hi nahi, aur rahega bhi nahi (I’ve never felt insecure of my co-stars and I never will).
Mujhe lagta nahi ki aajkal ke bachchon mein hai, thoda thoda sab mein hoga, but that’s normal, it’s a normal phenomena, bhidu (I don’t think modern kids have insecurity, they might feel it on occasions, but that’s normal). 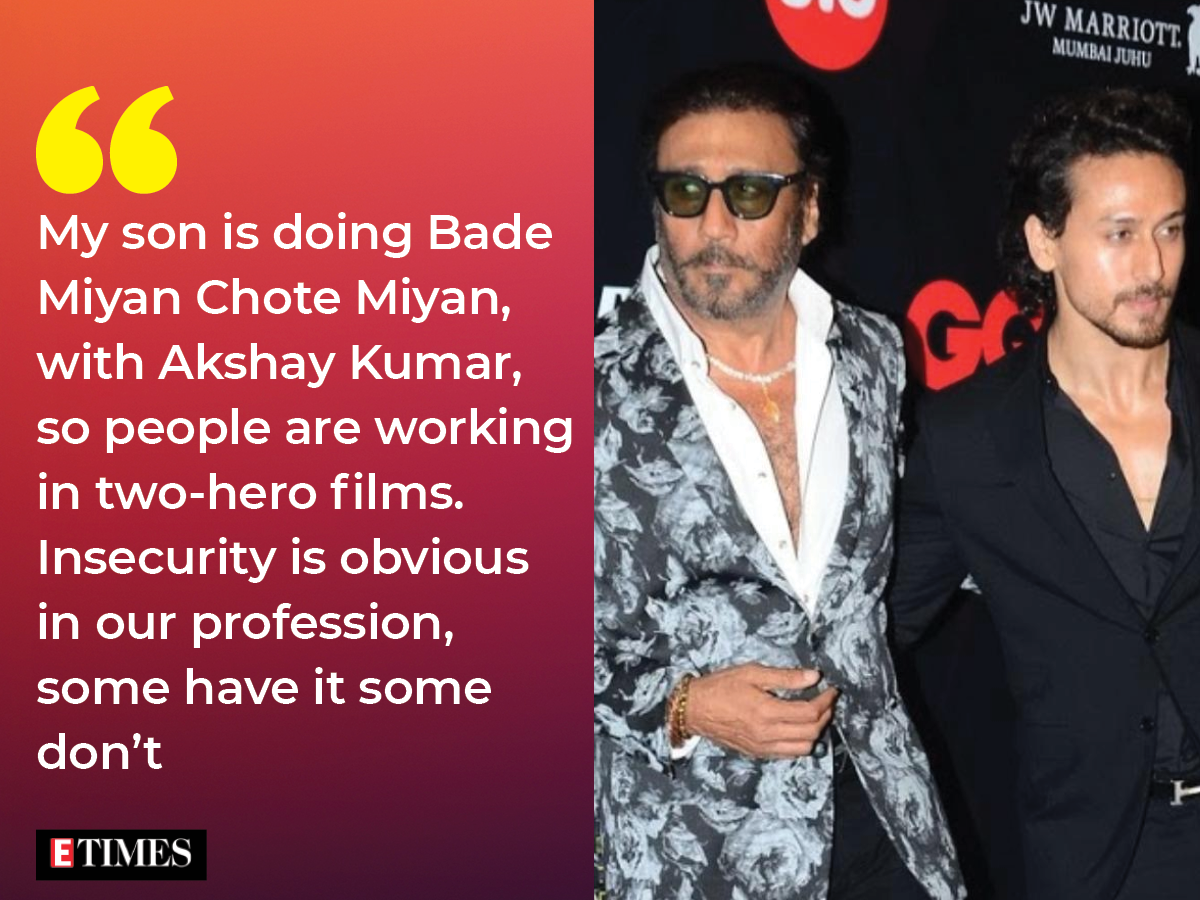 Being an outsider, working with so many star kids, did you ever feel like you didn’t want to share screen space with others because of the comparisons?
No, I never felt that way. In fact, I was always happy when my colleagues had the stronger the role, it took the load off my head. Samjha? (Get it?)
Devdas mein Devdas Shah Rukh baba bane, uske sar par poora bhoj hai, mein toh Chunni Babu hoon, Mission Kashmir mein villain hoon (Shah Rukh was Devdas, the onus was on his head, I was just playing Chunni Babu, I was the villain in Mission Kashmir), so I rather take a backseat than be a front runner.
Unees bees ka farak nahi padta hai (It’s a question of minor distinctions).

You’ve been one of the few actors who were happy to take on negative roles, as recently in Sooryavanshi. What excites you about these characters?
Nothing excites me more than playing a good, bad, or ugly character so long as I’m the one playing it. I keep saying, I’m like a potato, you put me in any vegetable and I’ll be okay. From films you went to short films, then you diversified further with OTT with shows like OK Computer. Is it important to keep reinventing yourself?
In my case it’s not thought of, it just happens. The writers are the ones who think about the characters, they reinvent you. It is up to you whether you like it, or whether you do it or not.
Jo likhkar dete hai, woh kehte hain ki aapko dekhkar maine ek kahaani likhi and they tell me that I fit into their story well. So it’s up to them. All I can do is say yes or no. That depends on our understanding,
ki yeh role karna chahiye ya nahi (should I do the role or not). It is the writers and the technicians who have made me what I am today.

Your image has been synonymous with your fashion and sense of style. In fact, back in 1994, you were even credited as a costume designer in Rangeela. What does fashion mean to you?
What I used to do is,
paise hote nahi the, toh uss waqt Khadi Bhandar mein sabse khoobsurat, saste, sundar, tikauu aur
beautiful outfits milte the (I didn’t have any money and at that time Khadi Bhandar had the the most beautiful and cheap outfits). Beautiful things were made from khaki fabrics, so we used to go there, pick up the cloth and get pants stitched. Then we would paint over the fabric,
yeh karte karte kapde bann ne lage, aur jo comfortable laga woh pehna (that’s how we made several clothes and I always wore what I was comfortable in). It’s about how you carry yourself. You can wear anything, but it’s how you carry it off that makes the difference.