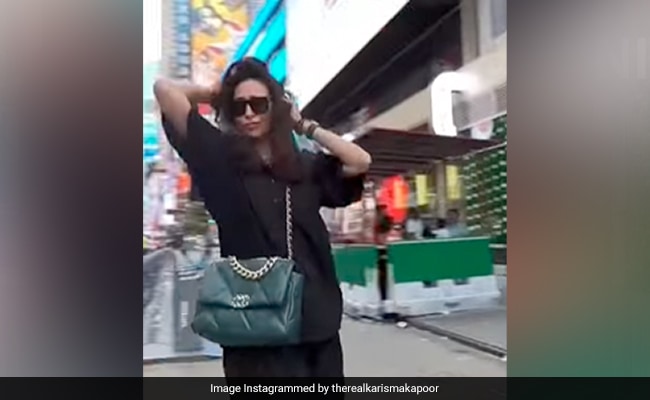 Karisma Kapoor in a still from the video. (courtesy: therealkarismakapoor)

Karisma Kapoor is in New York and is having the time of her life. Need proof? Just cast a glance at her Instagram timeline. Or even better – allow us to take you through it. On Monday, Karisma added a whole lot of charm to our Instagram feed by sharing a video of her dancing on the streets of New York. Dressed in a black shirt and pants, Karisma looks gorgeous as always in the video. The actress has added the song Empire State Of Mind by Jay-Z and Alicia Keys in the background. In the caption, Karisma said: “These lights will inspire you,” with sparkle emojis.

Replying to the post, Shibani Dandekar said, “Stunner,” with a heart emoji.

While in New York a week ago, Karisma Kapoor – dressed in a white ensemble – posed next to a classic yellow taxi, grinning broadly. She wrote, “New York #summertime” and tagged a Statue Of Liberty emoticon.

Before New York, Karisma Kapoor shared a selfie video from London and added in the caption, “Sending (love emoji).”

While in London, Karisma Kapoor also celebrated her aunt’s Neetu Kapoor’s birthday with their family. Karisma shared an image from the bash that saw her daughter, Samaira Kapoor as well as sister Kareena Kapoor, Saif Ali Khan, Taimur, and Riddhima Kapoor Sahni, among others. Sharing the album of lovely pictures, Karisma said, “Fam – Jam,” with a heart emoji.

Before that Karisma Kapoor dropped an image – one that broke the Internet – featuring her alongside Kareena Kapoor, Amrita Arora and Natasha Poonawalla. For the picture that would look perfect in the Sex And The City universe, Karisma Kapoor said, “No caption needed,” with heart emojis.

On the work front, Karisma Kapoor will be seen in Brown, a  project based on City of Death by Abheek Barua.