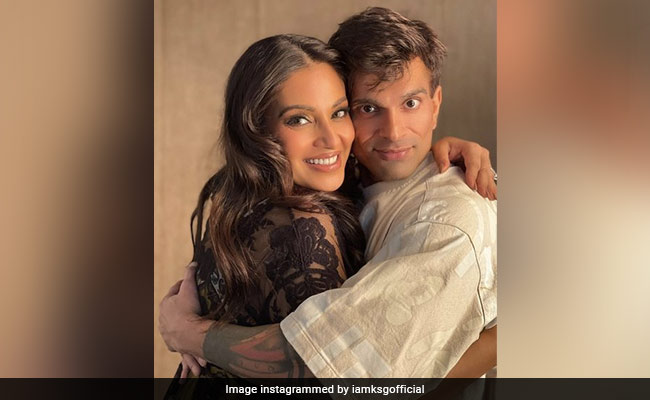 Since Bipasha Basu and Karan Singh Grover announced that they are expecting their first child together, they have kept their Insta family updated by sharing glimpses of their journey. Speaking of which, on Monday, Karan shared a loved-up post on his Instagram handle in which they both can be seen holding each other close as they pose for the camera. In the image, pregnant Bipasha looks beautiful in a green and black ensemble, while Karan looks dashing in a beige and white shirt. Sharing the post, Dill Mill Gayye actor captioned it as All mine!!!,” followed by an evil eye amulet and a trident emoji. Soon after he shared the post, his wife Bipasha commented, “Cutie pie,” followed by a heart emoticon.

Last month, the couple announced the pregnancy on Instagram by sharing pictures from their maternity shoot. Along with the images, they dropped a long note expressing their happiness. An excerpt from the post read, “We began this life individually and then we met each other and from then we were two. Too much love for only two, seemed a little unfair for us to see…so soon, we who once were two will now become three. A creation manifested by our love, our baby will join us soon and add to our glee”.

A few days ago, Bipasha Basu shared a stunning picture showing off her baby bump in a sheer black ensemble. Sharing the post, she wrote, “Magical feelings. Difficult to express in words,” followed by a heart and an evil eye amulet emoticons.

Bipasha Basu and Karan Singh Grover met during the shooting of their 2015 film Alone and got married in April 2016 as per Bengali traditions. The couple has also co-starred in the web series Dangerous.

Sleepless Knights kick their way to the top

7 tips to bring excitement back into your long-term relationship