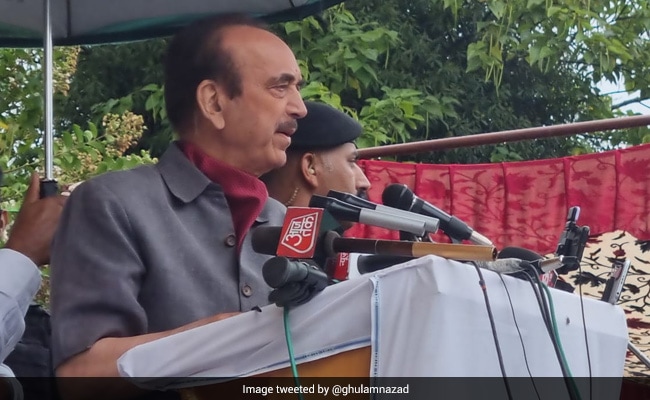 Former Congress leader Ghulam Nabi Azad, who is set to launch his own political outfit, on Sunday said Article 370 of the constitution, which granted greater autonomy to Jammu and Kashmir and was revoked two years ago by the BJP government at the centre, can’t be restored.

In his first public meeting in North Kashmir’s Baramulla, Mr Azad targeted regional parties for “misleading people” by promising them to push for the restoration of Article 370.

“Ghulam Nabi Azad will not mislead anyone. For votes, I will not mislead and exploit you. Please don’t rake up issues which can’t be achieved. 370 can’t restored. It needs two-thirds majority in parliament,” said Mr Azad in a fiery speech.

He said the Congress is “going down” with every election and there is no party in India which can get majority in parliament and restore Article 370.

The former Congress leader said he will be launching his party in Jammu and Kashmir within the next 10 days to “fight politics of exploitation and falsehood”.

“The politics of exploitation has led to the killing of one lakh people in Kashmir. It has orphaned five lakh children and caused massive distraction,” said Mr Azad.

He said he has come to Jammu and Kashmir “to fight against the exploitation and falsehood even if it hurts his political prospects”.

Mr Azad’s stance is at odds with most regional parties in Jammu and Kashmir, including the Congress, which have signed a pact to campaign for the restoration of Article 370 – which granted special powers to the state.

“It’s another deception to provoke people for agitation and get them killed. So long Azad is alive, I will fight against falsehood. You will have to kill me if you want silence this idea,” said Mr Azad.

The veteran politician, who resigned from the Congress last month, promised people that he will rather fight for what’s achievable, which he says is restoration of statehood, and protection of jobs and land for the residents of Jammu and Kashmir.

“I will not raise emotive slogans for winning seats. We will have to fight for restoration of statehood. For this there is no need for a constitutional amendment,” said Mr Azad.

He also targeted his former party, saying that it was only Congress dissidents known as the G-23, which he was a part of, who had spoken out against the changes to Kashmir’s status in parliament.

He said once statehood is restored, the state government can make laws for protection of jobs and land for the residents of Jammu and Kashmir and these two issues don’t need approval of parliament.

The former Jammu and Kashmir Chief Minister tried to strike a chord with people by invoking his work on human rights and development in the union territory, which was downgraded to a union territory three years ago when its special status was revoked.

He reminded people how he prevented fake encounters and punished guilty police officials during his tenure as Chief Minister.

No Meeting With PM Modi In Delhi, Says Mamata Banerjee As She Wades Into G20 Logo Row