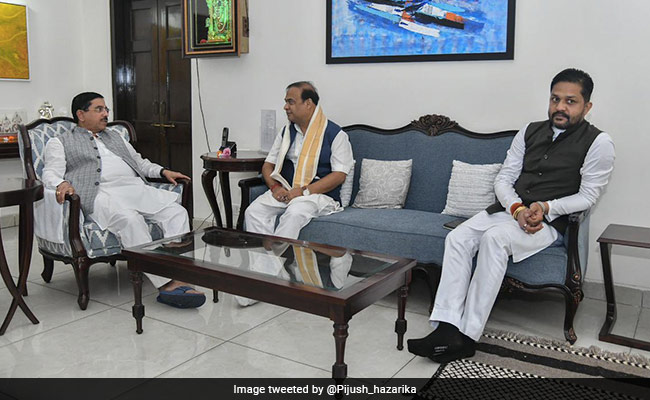 A day after a Jharkhand Congress MLA alleged that Assam Chief Minister Himanta Biswa Sarma is trying to topple the government in the state, the BJP has hit back calling the allegations “baseless”.

Congress MLA from Jharkhand’s Bermo, Kumar Jaimangal, has lodged a police complaint against the three Congress MLAs arrested in West Bengal’s Howrah with a huge amount of cash for allegedly luring other MLAs by offering Rs 10 crore each and a ministerial berth if the BJP forms government in the state.

He alleged that the trio had called him to Kolkata to take him to Guwahati and meet Assam Chief Minister Himanta Biswa Sarma in Guwahati along with them where he would have been promised a ministerial berth and cash worth crores after bringing down the JMM-Congress government in the tribal-dominated state.

The Assam Chief Minister “is doing it with the blessings of top shots of BJP political party sitting in Delhi,” his letter said.

Mr Sarma has responded saying the FIR filed by Mr Jaimangal is akin to the Congress asking Ottavio Quattrocchi to file a case against Bofors. Italian businessman Ottavio Quattrocchi was at the centre of the multi-million dollar Bofors scam which scalded the political careers of many Indian leaders including its youngest Prime Minister Rajiv Gandhi.

Fake FIR in #Jharkhand.
The so-called FIR looks like @INCIndia asking Ottavio Quattrocchi to file a case against Bofors. https://t.co/WMDHtxrAzA

“Even topmost persons of Congress keep in touch with me. We don’t talk about politics but being in a party for over 22 years, we keep in touch. I don’t know why FIR was filed on this,” Chief Minister Sarma had earlier said about allegations by Kumar Jaimangal Singh.

The three Jharkhand Congress MLAs — Irfan Ansari from Jamtara, Rajesh Kachhap from Khijri, and Naman Bixal Kongari from Kolebir — have been arrested and suspended from the party.

The relatives of MLA Irfan Ansari have rebutted allegations that the BJP is trying to destabilise the JMM-Congress coalition government in Jharkhand, saying, “the government cannot be brought down with just a meagre sum of Rs 40-50 lakh.”