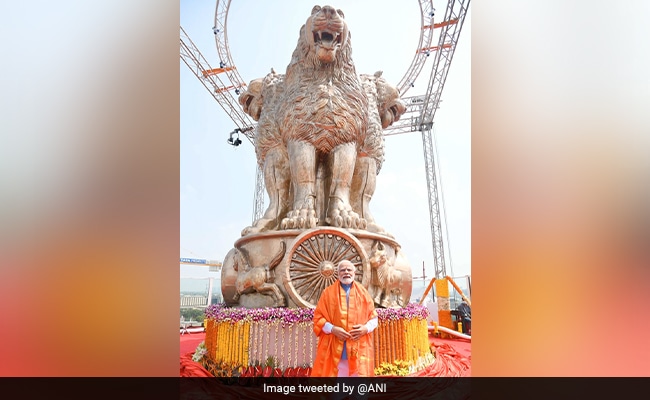 “The maximum, 99 per cent, is as per the Ashokan symbol,” said sculptor Sunil Deore.

The controversy over the massive bronze national emblem to be put atop the new parliament could be because of the angle at which the lions are being viewed, the artistes who built it told NDTV in an exclusive interview today. Also, part of the perspective is changing because of the enlargement, which is bringing every minor detail into focus, they added.

The 9500-odd kg bronze — to be mounted atop the new parliament at the heart of Delhi — has been the focus of strong criticism.

A section of opposition leaders have called it a menacing, snarling version of the majestic and graceful Ashokan lion capitol that has completely distorted its message of peace.

Giving it a political spin, many have demanded that it be pulled down. Others have called for legal action for the distortion.

Admitting that there may be minor changes, mostly because of the damages in the original, sculptor Sunil Deore who was in charge of the project said, “The maximum, 99 per cent, is as per the Ashokan symbol”.

Then he added, “The photograph is out of zoom. The lower angle is changing the expression”.

“As an artist, we have conducted researches going to the museum. We have only enlarged on the original, which is 2.5 feet. In such cases, everything gets magnified. You have to think of that. And this sculpture we will see from parliament, at least a 100 meters away. So we had to have to emphasise the details, so that they look similar even from a distance,” he added.

“Like we said, you are going to view it from a very, very great distance. So all of that have been kept in mind and as such there is no deviation in the piece that you see…. At eye level, the outline will match the emblem,” added his colleague Romel Moses.

Asked what they will say to the people who say this is a deliberate attempt to make the lions look angry, Mr Moses said, “It is a message of peace given by a very powerful character, that is a lion. A message of peace can never be given in anger”.

There has been a flood of criticism from opposition leaders since the unveiling of the bronze yesterday.

“The original emblem has a mild expression, but those built during Amrit Kaal show a man-eater’s tendency to consume everything in the country,” tweeted Lalu Tadav’s Rashtriya Janata Dal from its official angle.

Jawhar Sircar, a Rajya Sabha MP of Trinamool Congress and a former CEO of the government-run Prasar Bharati, termed it an “insult to our national symbol, the majestic Ashokan Lions”.

“Insult to our national symbol, the majestic Ashokan Lions.  Original is on the left, graceful, regally confident. The one on the right is Modi’s version, put above new Parliament building — snarling, unnecessarily aggressive and disproportionate. Shame! Change it immediately!” read his tweet.

Afternoon brief: Def R&D to be opened to private sector for high-tech platforms, and all the latest news