Manchester United got their pre-season off to a flying start with a 4-0 rout of a lacklustre Liverpool in Thailand on Tuesday, 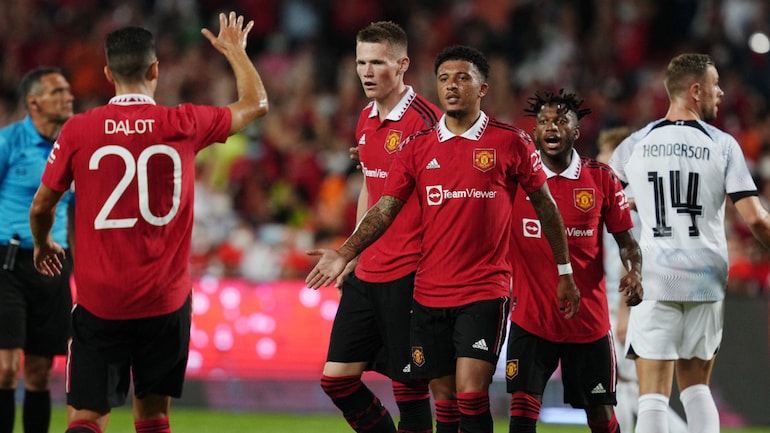 Erik ten Hag enjoyed a winning start to life as Manchester United manager as the team registered a promising 4-0 friendly win over Liverpool. The result is unlikely to trouble Liverpool manager Juergen Klopp. The German picked an experimental side, while United were nearly at full strength and Klopp played three separate outfield teams for half an hour each, with the first two including a number of youngsters.

Yet United still outclassed their biggest rivals with Jadon Sancho, Fred, Anthony Martial and Facundo Pellistri all on the scoresheet and delighting Ten Hag, who praised his side’s spirit.

“I know we have good players, now we have to construct a team,” he said.

“We have to not overestimate this result, we have to be careful. But still I’ve seen some really good things … we have a lot of creativity and speed up front, we have the potential.”

The encounter had a pre-season feel with Liverpool using more than 30 players and United over 20.

Liverpool had the best of the early action and drew roars from the crowd of 50,000 before United went ahead after 12 minutes, when a Bruno Fernandez cross was poorly handled by the Liverpool defence, allowing Sancho to fire into the bottom corner.

United fended off a late Liverpool rally and completed the demolition with 14 minutes left, Pellistri latching onto an Eric Bailly pass on the counter and converting with ease after a one-two with Amad Diallo.

“The goals we gave away for United we really should get an assist for it to be honest,” Klopp said.

“But I saw a lot of good stuff from our guys as well.”