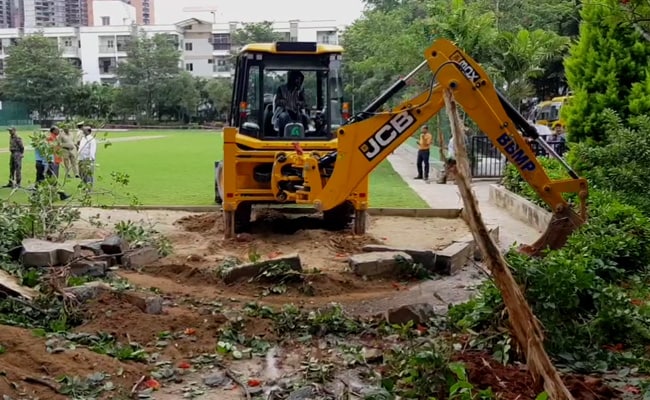 The demolition drive will continue until the encroachments are cleared, the minister said

Days after heavy rain and floods all but paralysed Bengaluru, a Karnataka Minister has warned that illegal constructions will be “razed like the Noida Twin Towers”.

Bengaluru’s civic body has marked out over 700 encroachments that are believed to have blocked storm water drains across the city, which caused massive flooding in the IT city known as India’s Silicon Valley.

“We will raze illegal constructions on the lines of the Twin Towers demolished recently,” said the minister, referring to the controlled explosion to tear down the Supertech towers, which were constructed illegally.

The buildings, which were taller than the Qutub Minar, were brought down within seconds by 3,700 kg of explosives.

“We will take action against the builders and officials who had granted permissions,” said Mr Ashoka.

The minister blamed the Congress for clearing plans for buildings near more than a dozen lakes.

“The government before 2005 allowed layouts for buildings on 13-14 lakes. That’s the main problem,” he said.

Bulldozers and excavators have been at work across the city since yesterday to pull down what they call illegal structures on storm water drains, which caused flooding in the city.

Chief Minister Basavaraj Bommai has said no one will be spared.

“I have given a clear direction to the officials to remove the encroachment whoever has built structures on the stormwater drains and interrupted the flow of rainwater. This I have made very clear on day one. There is no question of any partisanship on the issue…,” the Chief Minister said on Monday.

“Whoever they are, we will not spare them. Everybody suffered during floods, be it IT-BT people or the common people,” he said.

The drive will not stop until encroachments are cleared, Mr Bommai said.