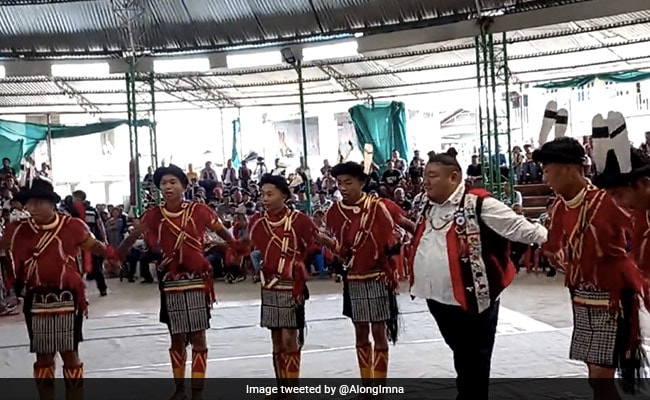 Nagaland minister Temjen Imna Along needs no introduction anymore. He has been popular on social media ever since he made cheeky remarks on having “small eyes” and being single. Now, he is yet again winning hearts online as he posted a video of himself dancing during the Tsungremmong festival.

“See, I can dance too!” he wrote while sharing the clip on Twitter. In the video, Mr Imna can be seen participating in the celebration and also joining locals in a group dance. “#Tsungremong- a festival of the Ao Nagas celebrated for invoking blessing of a bountiful harvest. A rich heritage enthusiastically preserved and passed on to the younger generations,” the minister wrote.

See, I can dance too! 🕺 #Tsungremong– a festival of the Ao Nagas celebrated for invoking blessing of a bountiful harvest.

A rich heritage enthusiastically preserved and passed on to the younger generations.

Visit Nagaland to explore its culture & dance along with the locals. pic.twitter.com/zPbqBDgZPD

Since being shared, the video has won the hearts of many internet users. It has garnered more than 95,000 views and over 11,000 likes. While some users called Mr Inma a “multi-talented personality,” others simply wrote that he is “maintaining the joy and single status… Bravo!”

One user said, “Along jee you  are our (India’s) treasure…” Another wrote, “So beautiful, I admire your humility and your sense of humour.” A third called him a “rockstar,” while a fourth said, “one of the coolest minister we are witnessing.”

Mr Inma is truly an internet sensation. Last month too, he won over Twitter with his witty remark on Google’s concern about his wife. He shared a picture of the most asked question on Google about him and among the several queries, one search that was highlighted by him was, “Temjen Imna Along wife.”

Reacting to this, the Nagaland minister wrote, “Ayalee, @Google search excites me. I am still looking for her!” The same month, on World Population Day, Mr Inma also urged social media users to join his movement and “stay single” like him.