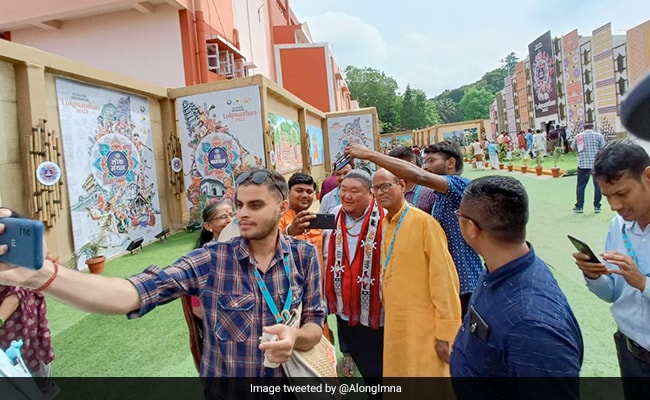 Nagaland minister Temjem Imna Along posted a photo of people taking selfie with him.

Nagaland minister Temjem Imna Along is known for his heart-warming posts on social media. The minister has won hearts of Twitter users with posts where he recounted his early days in Delhi. And now, Mr Imna Along has shared a photo in which he is seen surrounded by a group of people. They were trying to click a selfie with the Nagaland minister, and he said the attention makes him feel like a “celeb”. The tweet has been liked by 11,500 users and 553 of the have retweeted it.

“When you’re cute and single, you attract paparazzi everywhere. Feeling like a Celeb,” the minister said in his tweet.

“You are not just cute and single, you are a rockstar! Celeb you sure are!” said one user. “You are one of the most adorable human being of this ‘Milky way galaxy’,” added another posting a fire emoji alongside.

Other users found the post too funny and posted various smiley emojis.

Earlier this month, had shared a glimpse of his journey from Guwahati to Dimapur in Rajdhani Express that left the internet nostalgic.

Mr Imna Along’s post featured the meal that was served on the train. The picture showed chapatis, rice, dal, curry, dahi and an omelette. “Life is a journey, enjoy the trip; Food is life, never skip your meal!” he wrote, adding, “Grateful for the wonderfully served dinner at #RajdhaniExpress while heading to Dimapur from Guwahati.”

Railway Sewa thanked the minister for the positive feedback. They wrote, “Sir, thank you for sparing your valuable time in writing to us. However your feedback will boost our team energy to work with more enthusiasm.”