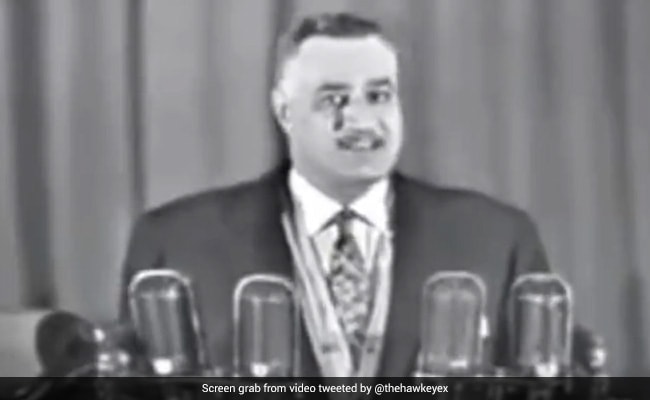 At least 41 people have died and over 700 arrested in the ongoing protests in Iran.

Massive protests have been going on in Iran over the death of 22-year-old Kurdish woman Mahsa Amini, who was arrested by the morality police for not wearing a hijab (headscarf) in a proper way. On the streets, demonstrators have set fire to pictures of Iran’s supreme leader Ayatollah Ali Khamenei amid shouts of “death to the dictator”. In a symbolic act of opposition to the hijab rule, women protesters also chopped off their hair and burnt their headscarves publicly.

Now, amid the demonstrations, an old video of former Egypt President Gamal Abdel Nasser mocking the need for making hijabs mandatory for women in Egypt has surfaced on social media.

This is what Gamal Abdel Nasser, second president (1954-70) of Egypt, responded to head of Muslim Brotherhood who insisted for mandatory Hijab in Egypt.

This was 1958. What has reversed that era of liberalism & empowerment in last few decades?pic.twitter.com/IW1xV7LqxT

“This is what Gamal Abdel Nasser, second president (1954-70) of Egypt, responded to head of Muslim Brotherhood who insisted for mandatory Hijab in Egypt,” the caption of the post read. “This was 1958. What has reversed that era of liberalism & empowerment in last few decades?” it added.

Also Read | Sikh Student With Kirpan Arrested At US University

“I met the head of the Muslim Brotherhood and he sat with me and made his requests. What did he request? The first thing he said to me was to make wearing a hijab mandatory in Egypt and make every woman walking in the street wear a tarha (scarf). Every woman walking!” Mr Nasser added.

To this, the crowd was quick to express their disappointment, with one even shouting, “Let him wear it”. The former President of Egypt chuckled and further continued telling the crowd what he told al-Hudaybi. “My opinion is that every person in his own house decides for himself the rules,” he said.

“And he replied: ‘No, as the leader you are responsible’ I told him ‘Sir you have a daughter in The College of Medicine… she’s not wearing a tarha. Why didn’t you make her wear a tarha? If you are unable to make one girl – who is your daughter! – wear a tarha, you want me to put a tarha on 10 million women? By myself,” Mr Nasser asked as the audience applauded.

Since being shared, the video has left internet users shocked. “Can’t believe this was 1950s Islam. Damn, what happened !!!!” wrote one user. “Seems like an era where common sense was still in abundance,” added another.

Meanwhile, at least 41 people have died and over 700, including 60 women, have been arrested in the ongoing protests in Iran over the death of Ms Amini in morality police custody. 22-Year-old died after being arrested by Iran’s infamous morality police for allegedly not wearing a hijab the proper way. Following her death, large-scale protests flared up in multiple cities in the country, with the government resorting to a major crackdown on protestors.

Historic crown to be modified for King Charles’s coronation