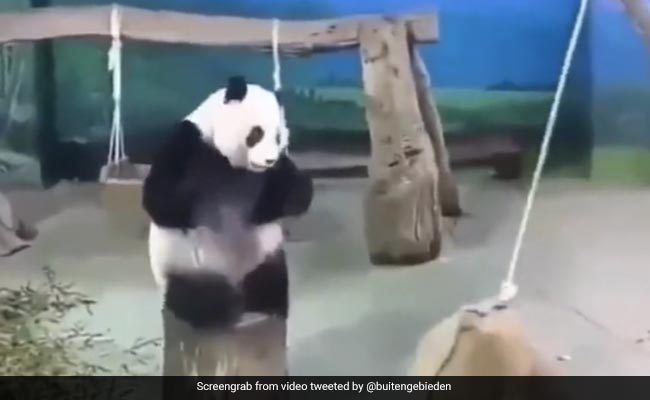 There are countless videos of animals and their lovely, adorable antics on the internet, but nothing compares to seeing wild animals playing and enjoying themselves in their natural surroundings or captivity. One such video that has surfaced on the internet shows a panda playing in captivity.

The video was posted by a user named Buitengebieden on Twitter on Friday. “The timing of a panda,” reads the caption.

The timing of a panda.. 😅 pic.twitter.com/QiwoEwJCiA

A panda is seen sitting on a raised platform in the widely shared video. It may be seen dangling in front of it with a sack attached to a rope. The animal carefully plans its steps before hopping onto the bag, but it falls to the ground instead.

The video has received over 3.9 million views and more than one lakh likes since it was uploaded. Twitter users flocked to the post’s comment section to express their concern at the lovely animal tumbling to the ground. A lot of individuals have also commented on how adorable the animal is.

One user wrote, “I always wonder how they survive in the wild.”

Adoring the animal’s nature, another said, “Pandas are so goofy and lovable.”

“I thought he was trying to play tether ball Where’s Napoleon? ” wrote another while sharing the post.

Social media users frequently post videos of pandas doing things like rolling around, walking, and climbing trees. In the highlands of central China, you may find these bear-like beasts in bamboo woods. Because of their beautiful black and white coat, which is matched with a hefty physique and a round faces, pandas have an intriguing look.