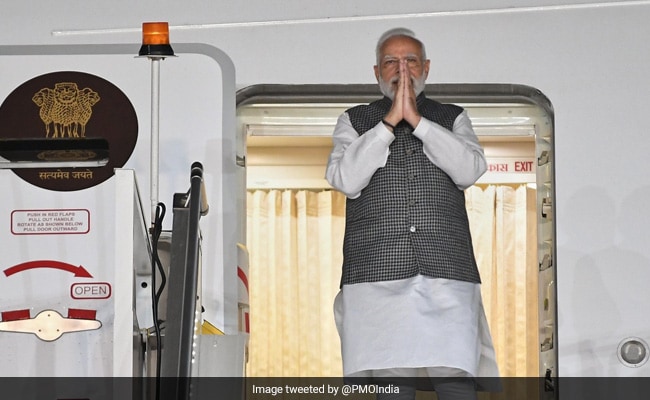 Prime Minister Narendra Modi left for Tokyo on Monday evening to attend the state funeral of Japan’s former prime minister Shinzo Abe, who reshaped Japan’s foreign policy including setting out a bold vision for a quantum leap in its ties with India.

Representatives from over 100 countries, including more than 20 heads of state and governments, are expected to attend Abe’s funeral on Tuesday at the Budokan, an indoor sporting facility.

Abe was shot dead while making a campaign speech three months ago in the southern Japanese city of Nara.

India had announced one-day national mourning on July 9 as a mark of respect for Abe.

“I am travelling to Tokyo tonight to participate in the State Funeral of former PM Shinzo Abe, a dear friend and a great champion of India-Japan friendship,” Prime Minister Modi tweeted hours before departing for Tokyo.

“I will be conveying heartfelt condolences to Prime Minister Kishida and Mrs. Abe on behalf of all Indians. We will continue working to further strengthen India-Japan relations as envisioned by Abe San. @kishida230,” he said.

“The visit will be an opportunity for Prime Minister Modi to honour the memory of former PM Abe, who he considered a dear friend and great champion of India-Japan ties,” he said.

In a historic address to the Indian Parliament in August 2007, Abe elaborated on his ambitious roadmap for India-Japan strategic ties to collectively deal with geopolitical challenges and for the overall prosperity of Asia.

In the “Confluence of Two Seas” speech, he told Indian lawmakers that the India-Japan relationship is blessed with the largest potential for the development of bilateral relationships anywhere in the world.

Kwatra said Modi and Abe developed a personal bond through their meetings and interactions spanning over a decade, beginning with Modi’s visit to Japan in 2007 as the chief minister of Gujarat.

“PM Abe made significant contributions to deepening India-Japan relations, turning a largely economic relationship into a broad, comprehensive, and strategic partnership, making it pivotal for the two countries’ and the region’s security,” Mr Kwatra said.

“His famous ‘Confluence of Two Seas’ speech in the Indian Parliament in 2007 laid the ground for the emergence of the Indo-Pacific region as a contemporary political, strategic, and economic reality,” he said.

The foreign secretary said Abe’s contribution to India-Japan relations was recognised when India conferred on him the prestigious Padma Vibhushan award in 2021.

Mr Kwatra said the duration of Modi’s visit from the time of his departure from Delhi will be around 12 to 16 hours.

Kishida visited India for the annual summit in March, while Modi visited Japan for the Quad Leaders’ Summit in May.

“These meetings underscored the two leaders’ commitment towards deepening India-Japan ties, particularly in the context of shaping a post-pandemic regional and global order,” Mr Kwatra said.

“Today, Japan is one of the most trusted and valued strategic partners of India. The two sides are committed to strengthening bilateral partnership on key areas of trade and investment, defence and security, climate change, health security, infrastructure, digital, industrial development, energy, critical and emerging technologies, and human resources, among others,” he said.

Mr Kwatra said there is deep convergence between India and Japan in the Indo-Pacific region.

“The bilateral meeting between Prime Minister Modi and Prime Minister Kishida during the upcoming visit will be an opportunity for the two leaders to reaffirm their commitment to further strengthening of the India-Japan Special Strategic and Global Partnership,” he said.