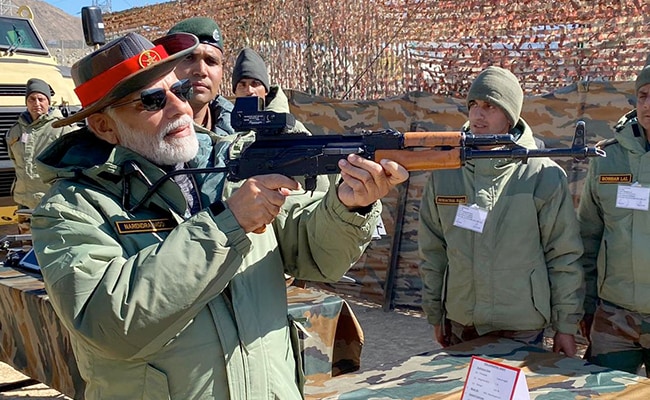 PM Modi is in Kargil to celebrate Diwali with the soldiers deployed there.

Peace is impossible to attain without power, Prime Minister Narendra Modi told the soldiers in Kargil, even as he said his government has always considered war as the last option. PM Modi is in Kargil to celebrate Diwali with the soldiers deployed there.

“We have always considered war as the last option. Whether it took place in Lanka or Kurukshetra, till the end, every effort was made to prevent it. We are in the favour of world peace,” said PM Modi.

The Prime Minister addressed soldiers as his “family” and said he couldn’t have celebrated a better Diwali without them. He also praised their bravery and said there has been no war with Pakistan where Kargil has not seen victory.

“Sweetness and brightness of my Diwali is amid you,” he told the soldiers.

Praising the fight against terrorism, he said, Drass, Batalik and the Tiger Hill have been the witnesses of their courage. “In Kargil, our soldiers have managed to crush terrorism. I am a witness to the event,” he said.

“India is now respected globally. While you protect our borders, we are taking a tough stand against our enemies. If we are challenged, then our armed forces know how to give a befitting reply to the enemy in their own language,” he said.

The Prime Minister, who has been celebrating Diwali at various military facilities since coming to power in 2014, said all the three defence forces – Army, Navy, and Air Force – have taken steps to reduce their dependence on imported equipment.

“The country is secured when its borders are protected and economy is strong. In the past seven-eight years, India’s economy has reached the fifth position from 10th,” he added.

In war-hit Ukraine, the Indian flag became a protective shield for the citizens stuck there, said PM Modi.

Targeting the previous governments over corruption, he said misgovernance has restricted the country’s potential for development.

“Today the country is fighting a decisive war against corruption. No matter how powerful the corrupt is, he can’t escape, he won’t even survive. Misgovernance limited the country’s potential for a long time and put obstacles in the way of our development,” said PM Modi.

On the induction of women cadets in armed forces, the Prime Minister said, “Our power is going to increase with the arrival of our daughters in the Indian Army.”

The Prime Minister arrived in Kargil earlier in the day and also extended his Diwali greetings on social media.

“Wishing everyone a Happy Diwali. Diwali is associated with brightness and radiance. May this auspicious festival further the spirit of joy and well-being in our lives. I hope you have a wonderful Diwali with family and friends,” he tweeted.