Priyanka Chopra has dropped an unseen picture with daughter Malti Marie Chopra Jonas on Instagram and it has love written all over it! The actress is seen joyfully playing with her daughter, whose face is hidden in the picture.

Check out the photo here: 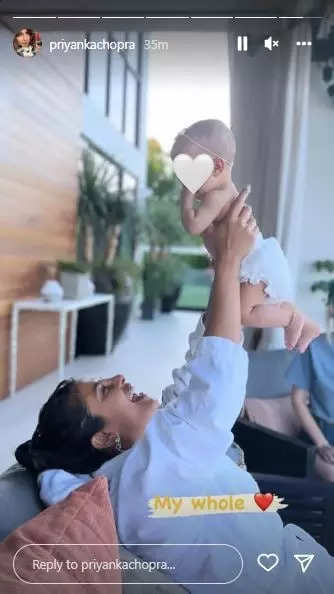 In the picture, Priyanka is seen sitting on a couch tilting backwards and lifting Malti. Dressed in a white dress, Priyanka is all smiles as she plays with her angel. She captioned the post, ‘My whole (red heart emoji)’ and added a white heart emoji to cover Malti’s face.

Priyanka welcomed her first baby with her husband Nick Jonas via surrogacy earlier this year. Ever since then, the two have been enjoying every second of parenthood with their bundle of joy. Although the couple is often seen sharing pictures of their baby girl every now and then on social media with their fans, they are yet to show her face to the world.

Earlier, in an interview with a news portal, Priyanka’s mother Madhu Chopra had revealed that Priyanka and Nick might show Malti’s face on her first birthday.

Meanwhile, on the work front, Priyanka will next be seen in Farhan Akhtar’s upcoming film, ‘Jee Le Zaraa’ co-starring Alia Bhatt and Katrina Kaif. Apart from this, she is also a part of upcoming web series, ‘Citadel’.