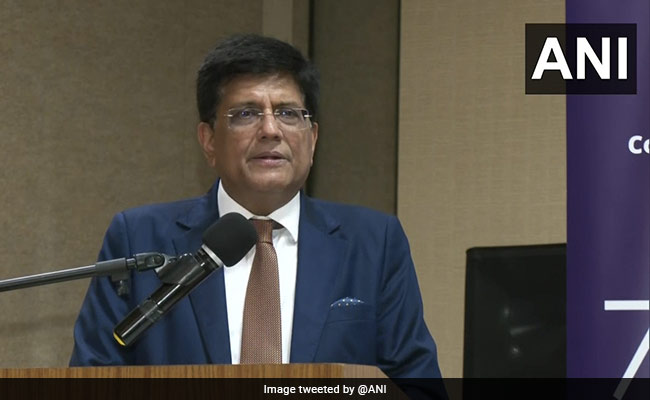 India has the advantage of demographic dividend, Piyush Goyal said.

Assessing the impact of the foundational changes and structural transformation that has happened in the last few years, the Confederation of Indian Industry (CII) estimated that India in 2047 will be a USD 35-45 Trillion economy, taking the country into the league of developed nations, Union Minister for Commerce and Industry Piyush Goyal said on Sunday.

India as an economy in 2047 can be seen as a powerhouse driving global growth, Mr Goyal said as he invited the business community of Southern California to invest in India.

“Accessing the impact of the foundational changes and the structural transformation that has happened in the last few years, preparing India to rapidly grow. CII estimates India in 2047 to be a 35-45 trillion economy, taking us into the league of developed nations, a prosperous country, a country that cares for every single citizen of the country,” Mr Goyal said while addressing the business community of Southern California.

Mr Goyal said, “We are proud to be the mother of all democracies. We are proud to have a vibrant judiciary, rule of law, robust media, and transparent government systems. India as an economy in 2047 can be seen as a powerhouse driving global growth.”

“I can see an economy which at least on a business and social case, a 30 trillion USD economy, possibly as, CII estimated recently. Working on the foundation that has been prepared over the last few years,” he said.

The Union Minister invited the business community of Southern California to invest in India calling it a golden period and the next 25 years of amritKaal as a crucial time for the country.

“As we embark on our journey towards making India a developed nation, it is an important time for us to reflect on where we see India in the next 25 years,” he said.

Mr Goyal went on to say that the next 25 years of Amrit Kaal, as articulated by PM Modi, are going to define India’s growth story.

“India has the advantage of demographic dividend. Our youth, the aspirational people that we have in India is the biggest opportunity & each one of them is connected to the world with access to the Internet.

“This is a golden time to invest in India. I invite you all to be a part of India’s journey towards becoming a developed nation. I urge you all to resolve to gift Made in India products, to gift handlooms, handicrafts, khadi made by the artisans of India,” Mr Goyal said calling the business community to be a part of the nation’s journey towards being a developed country.

The IPEF ministerial summit in Los Angeles concluded on Friday with a consensus from the partner countries on ministerial statements for each of the four IPEF pillars: Trade; Supply Chains; Clean Economy; and Fair Economy.

“Fruitful discussions had been held over the course of the Indo-Pacific Economic Framework (IPEF) Ministerial meeting to bring together a group of like-minded, rules-based, transparent countries with a shared interest in an open Indo-Pacific region,” said Mr Goyal after concluding the meeting.

IPEF, a group of 13 countries, is a multilateral economic framework. Since its launch in May launch, IPEF countries have engaged in intensive discussions to scope out each pillar of the Framework.

The Indo-Pacific Economic Framework for Prosperity (IPEF) was launched jointly by the USA and other partner countries of the Indo-Pacific region on May 23, 2022, in Tokyo.

India joined the IPEF and Prime Minister Narendra Modi attended the launch event along with US President Joe Biden, Japanese Prime Minister Kishida Fumio and other leaders from partner countries. Previously, virtual Ministerial Meetings were held immediately after the launch on May 23 and thereafter from July 26-27, 2022.

India is committed to a free, open and inclusive Indo-Pacific Region and would work towards deepening economic cooperation among partners for the growth and prosperity of the region.

The framework is inclusive and allows flexibility to partner countries to associate with pillars based on their respective priorities, the Ministry of Commerce and Industry said in a statement.