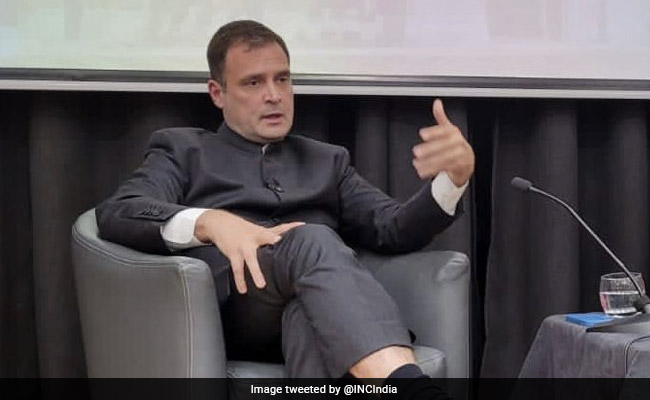 Rahul Gandhi spoke at Cambridge during a visit to the UK earlier this year.

Congress leader Rahul Gandhi is learnt to have left for a foreign trip again — a personal visit to Europe — and is expected to return on Sunday, ahead of the Presidential elections and the monsoon session of Parliament.

His frequent visits abroad — sometimes at key political moments — have led to questions about how committed Rahul Gandhi is about taking up a leadership role, especially when the Congress has been stunted by a series of losses over the past few years. This visit comes even as the party barely managed to stop defections in Goa.

No comments were immediately available from the Congress.

The party is scheduled to have a meeting on Thursday about its own presidential elections too, and Rahul Gandhi is set to miss that meeting. The Congress president’s post is currently held by Sonia Gandhi after Rahul Gandhi resigned following the 2019 Lok Sabha poll loss. Whether or not Rahul Gandhi will contest for the post is not yet clear.

Thursday’s party meeting will also work on plans for a ‘Bharat Jodo Yatra’ or Unite India Campaign set to start on October 2. Rahul Gandhi’s absence at the meeting is bound to further fuel speculation about the leadership question.

His recent visits that courted controversy include one in early May, when he was seen at a nightclub in Nepal’s Kathmandu. Pictures were released by BJP supporters, but the Congress said there was nothing wrong about the personal visit for a journalist’s wedding. This came just after the party’s poor performance in assembly elections in Punjab and Uttar Pradesh, among other states. Rahul Gandhi made a visit to Europe too in that time. Earlier, just before those elections, he had left for Italy in December, returning in mid-January, on a personal visit.

In the latter half of May, too, he went abroad. For this visit to Cambridge in the UK, BJP leaders raised questions over his refusal to take political clearance. The Congress said no such permission was needed. This visit, too, came at a crucial political time, during Rajya Sabha elections in which the party was struggling to stop cross-voting by its MLAs.

Have you tried hair steaming? Check out its amazing benefits for your hair | Fashion Trends