The manner in which the Narendra Modi government has set loose every central agency against opposition leaders show India is seeing the “onset of dictatorship”, Congress MP Rahul Gandhi alleged in a press conference this morning as his party prepped for a big protest over unemployment, price rise and the goods and services tax, or GST.

The BJP hit back, asking if there is “democracy” in the Congress, which has been labelled as a “dynastic party”, and alluding to the opposition party not having a non-Gandhi chief for a long while now. Mr Gandhi evaded a question by NDTV on whether he will take up the post of Congress president.

“What we have created brick by brick in seven decades have been decimated in just five years,” Mr Gandhi said. “We are seeing the death of Indian democracy. The only agenda of this government is to neglect people’s issues,” Mr Gandhi said.

The Congress today held protests against rising prices, unemployment and goods and services tax or GST rate hike. Party leaders plan to march to the Rashtrapati Bhavan in Delhi, while the Congress’s state units will hold similar protests across the country.

“Anybody speaking against this government is viciously attacked, put in jail; people’s issues are not being allowed to be raised,” Mr Gandhi alleged. “Today there is no democracy in India, there is dictatorship of four people,” he said, days after many opposition MPs were suspended from parliament for protesting inside the house despite the Speakers of both houses requesting them to behave and wait for their turn to debate.

The ruling BJP has for long maintained that the probe agencies are only doing their job and there is no targeted harassment of opposition leaders. The ruling party has highlighted the recent massive cash haul in the home of an aide of sacked Trinamool Congress leader Partha Chatterjee as one example of corruption unearthed by probe agencies.

“Stop demeaning the institutions of India to safeguard your corruption and misdeeds…If people don’t listen to you, why are you blaming us? If people saw dictatorship, it was during Emergency when people, including opposition leaders and editors, were jailed, judges superseded and censorship imposed…Why do you blame democracy when people of India reject you with repeated regularity?” Union Minister Ravi Shankar Prasad told reporters today. 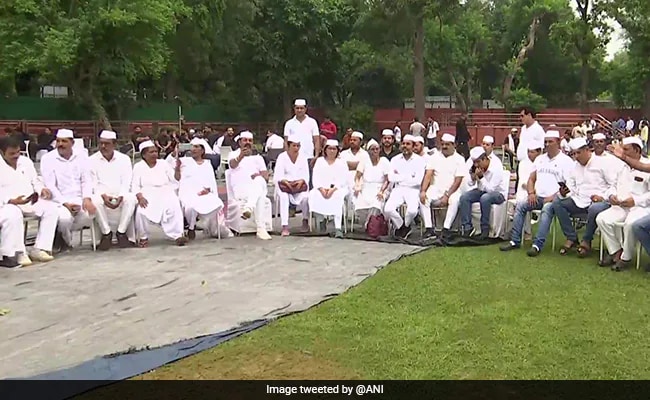 “I will be the happiest person if they arrest me,” Mr Gandhi told reporters today.

The BJP has said the Congress was not protesting to save democracy, but to save Mr Gandhi’s properties worth Rs 2,000 crore.

“Congress leaders have taken to the streets to put pressure an investigating agency openly because their corruption has been exposed,” Union Minister Smriti Irani said on June 13, when Mr Gandhi was being questioned. “But no one is above the law, not even Rahul Gandhi,” she had said.

Ms Irani alleged the ownership of the company was transferred to one family so that it doesn’t publish newspapers but become a real estate business instead.