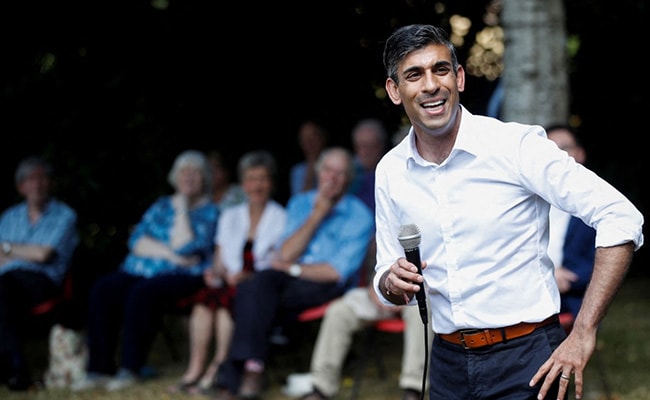 The UK’s general election is due in December 2024.

The United Kingdom’s former finance minister Rishi Sunak, one of the favourites to be the next Prime Minister, today formally announced that he is running to be the next Conservative Party leader and Prime Minister. He already has the support of well over 100 MPs — a minimum requirement to bag the top job.

“I want to fix our economy, unite our Party and deliver for our country,” he said in a tweet, adding that the choice his party makes now “will decide whether the next generation of British people will have more opportunities than the last”.

The United Kingdom is a great country but we face a profound economic crisis.

That’s why I am standing to be Leader of the Conservative Party and your next Prime Minister.

I want to fix our economy, unite our Party and deliver for our country. pic.twitter.com/BppG9CytAK

The 42-year-old is the clear frontrunner as he raced ahead with the backing of at least 128 Tory members of Parliament, even as loyalists of his former boss – Boris Johnson – claimed he has the necessary 100 MPs needed to make it to the shortlist.

While Mr Johnson is yet to officially declare his candidacy, the contest is shaping up as a three-way fight between Mr Sunak, Mr Johnson and third-placed Leader of the Commons Penny Mordaunt.

Former Prime Minister Johnson, who returned from a Caribbean holiday earlier in the day aiming to launch an audacious political comeback just weeks after leaving office, met Mr Sunak to discuss the race, the BBC and others reported.

Liz Truss had to resign on her 45th day as PM as her plans for tax cuts could not go through as there was no clarity on how she’d fund them — the shortest tenure for a UK PM. Boris Johnson had resigned in July after serving three years, owing to a series of scandals, such as partying during the Covid lockdown.

Nominations close on Monday, October 24. The 100 nominations required to be on the final ballot may be submitted by email or physically, say rules as detailed on the UK Parliament website.

If it goes to a vote, in case there are more than one with support of 100 MPs, the entire process will be completed by October 28.

The UK’s general election is due in December 2024.