England vs India: Former India wicket-keeper Saba Karim hailed the fast bowling duo of Jasprit Bumrah and Mohammed Shami after the Rohit Sharma-led side hammered the hosts by 10 wickets in the first ODI. 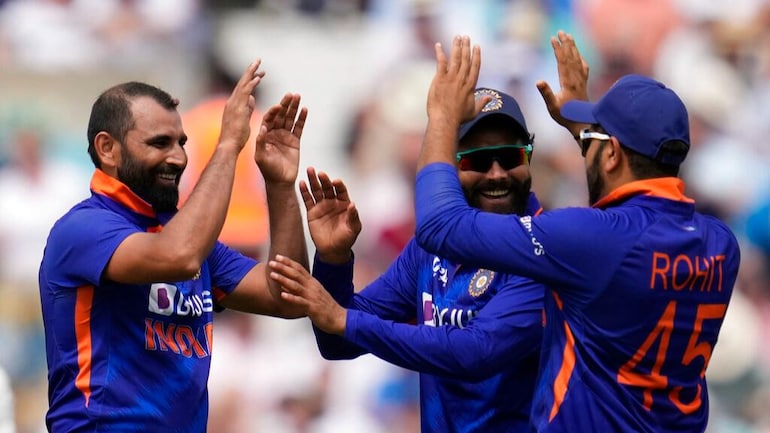 Former India wicket-keeper Saba Karim was in awe of Jasprit Bumrah and Mohammed Shami after the pace-duo starred in India’s comprehensive 10-wicket win over England in the first ODI at the Oval on Tuesday. Saba Karim said that the Indian team was blessed to have the formidable duo of Shami-Bumrah while adding that the Rohit Sharma-led unit has got the makings of an excellent one-day side.

Bumrah’s sensational performance helped India bowl out England for a paltry 110 in 25.2 overs after winning the toss and opting to bowl first in bowling-friendly conditions. The 28-year-old, with his career-best ODI figures of 6 for 19, became the first Indian pace bowler to take six wickets in an ODI in England. He was well supported by Mohammed Shami, who bagged 3 for 31 en route to becoming the joint third-fastest with 150 wickets, and Prasidh Krishna (1/26).

“They may ask the selector not to do any work now, should they? There you go. The players pick themselves. The Indian side is blessed that way. On one side you have Mohammed Shami and Jasprit Bumrah, such formidable players,” Saba Karim told Sony Sports after India’s win.

The experienced opening pair of Rohit Sharma and Shikhar Dhawan ensured a comfortable chase as they got home without losing a wicket. Chasing a small total, Rohit and Shikhar stitched an unbeaten century partnership and led India to a convincing 10-wicket win in the 18.4 overs. Rohit hit six fours and five sixes in his 58-ball unbeaten 76, while Dhawan finished on 31 not out off 54, having hit the winning boundary. The pair also became the fourth to cross 5000 partnership runs for the opening wicket in the process.

“In batting, you look at Rohit Sharma, you look at Shikhar Dhawan. At no.3 you have Virat Kohli. So I think this has got the makings of an excellent one-day side. And one can talk at length later during the program. What is India looking at now? Do the World Cup preparations start now? Is this the kind of line-up that you’re looking at? And if that is the case, then are we willing to stretch our boundaries? What can we do in our one-day line-up?” Karim added.