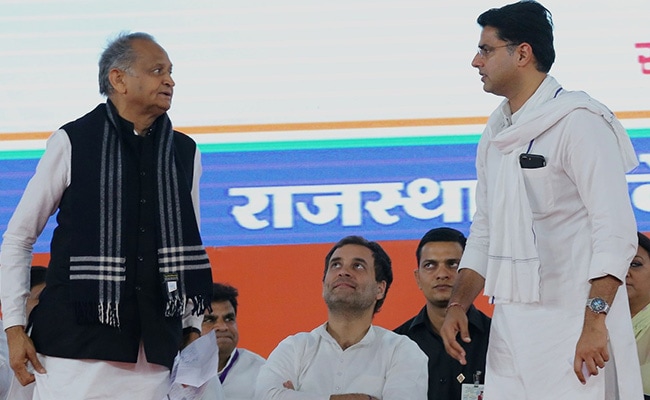 Mr Pilot had said the party high command will take a call on the next Chief Minister.(File)

In a big twist in political developments in Rajasthan, 92 MLAs of the Ashok Gehlot loyalists have threatened to resign. A mass resignation will bring down the strength of the house to 108 where the halfway mark will be at 55. The BJP has 70 MLAs.

These MLAs have reached the residence of Assembly speaker CP Joshi in Jaipur.

Earlier, the MLAs considered close to Chief Minister Ashok Gehlot met at the home of Cabinet Minister Shanti Dhariwal where the next Chief Minister is expected to be named.

In the meeting, the Gehlot loyalists raised the issue of Sachin Pilot’s rebellion in 2020 and said the Chief Minister must be from among those who supported the government at the time.

Here are the LIVE updates on the political developments in Rajasthan:

Ashok Gehlot On Congress Crisis: “Nothing In My Hands, MLAs Angry”
As more than 90 Rajasthan Congress MLAs loyal to him threatened to resign tonight, Ashok Gehlot reportedly told the party’s central leadership that it was “not in his hands”.

The MLAs met with the Speaker and claimed they will resign if Ashok Gehlot’s rival Sachin Pilot is made Chief Minister.

“Whatever is happening is Congress party’s own doing”: BJP’s Sunil Jakhar
“Everyone who has anything to do with politics in the country knows that Gehlot ji never wanted to be Congress president,” said Sunil Jakhar, BJP leader and former Punjab Congress chief.

As Rajasthan Chief Minister Ashok Gehlot is likely to resign from his post before filing his nomination for the Congress President poll, state legislator Pratap Singh Khachariyawas said that all the MLAs are angry and are resigning as they were not consulted before the decision.

“All the MLAs are angry and are resigning. We are going to the speaker for that. MLAs are upset how can CM Ashok Gehlot take a decision without consulting them”, said Mr Khachariyawas.

Congress MLAs have arrived at the residence of Assembly speaker CP Joshi in Jaipur.

Meanwhile, Chief Minister Ashok Gehlot had expressed their willingness to contest for the party’s topmost position. He said, “It’s decided that I’ll contest (for the post of Congress President). I’ll fix the date soon (to file his nomination). There’s the need for the Opposition to be strong, looking at the current position of the country.

Congress MLAs reach the residence of the Assembly Speaker CP Joshi.
A resignation by 92 MLAs will bring down the strength of the house to 108 where the halfway mark will be at 55. The BJP has 70 MLAs. Asked about the possibility of their move bringing down the Congress government, an MLA said, “We want Ashok Gehlot as the Chief Minister”.

Over 90 Team Gehlot  MLAs  are on their way to meet the Speaker saying they want to resign.

Jaipur, Rajasthan: All the MLAs are angry & are resigning. We are going to the speaker for that. MLAs are upset that how can CM Ashok Gehlot take a decision without consulting them: Pratap Singh Khachariyawas pic.twitter.com/xUFlx3lUPV

Just In: Team Gehlot MLAs set to resign in new crisis for Congress in Rajasthan

“There’s a tradition in Congress since the beginning – whenever there’s a Legislative party meet, we pass a one-line resolution to give rights to Congress president. This will happen today as well”: Rajasthan Chief Minister Ashok Gehlot | reported by news agency ANI pic.twitter.com/ArGCPdOkGV

Rajasthan Chief Minister Ashok Gehlot on Sunday said a one-line resolution saying all Congress legislators have full faith in the party president’s decision is likely to be passed during the Legislature Party meeting scheduled to be held this evening.

He said all party leaders will hold a discussion to arrive at a consensus and this has been the Congress’ strength.

What was expected to be a transition of power under the eyes of the party’s Central leaders, may have turned into an impasse with Team Ashok Gehlot digging in its heels after a meeting today. Sources said 56 MLAs of Team Gehlot have unanimously decided that the Chief Minister should be one of the 102 MLAs who supported the government during the rebellion by Mr Pilot and his 18 loyalists in 2020. Read here.

The Congress has called a meeting of its Rajasthan MLAs in Jaipur on Sunday evening amid buzz that Ashok Gehlot may finally make way for Sachin Pilot to become Chief Minister while he becomes Congress President.