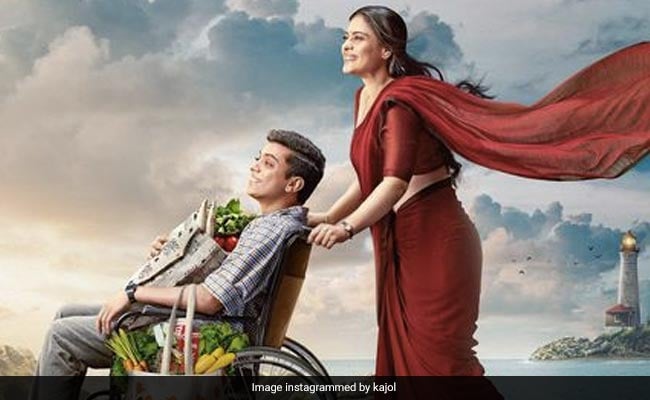 Rating: Three stars (out of 5)

A dying boy’s last wish and a mother’s unyielding fight on her son’s behalf before life ebbs out of him constitute the narrative kernel of Salaam Venky, a fictionalised account of a true story that director Revathy skilfully mines for all its tearjerking potential but without going overboard with it.

Maudlin tales of terminal illness often go off the rails when they push too hard to activate our lachrymal cells. Salaam Venky doesn’t.

Working with a wonderful cast of actors led by the redoubtable Kajol – she is absolutely luminous as a mother swaying between despondency and despair on one hand and hope and resolve on the other – Revathy packs what is essentially a socially relevant ‘conversation’ film with innate emotional verve, ideational depth and engaging dramatic highs. The result is a tale of a bitter personal and legal battle that can keep the audience invested in the way it unfolds and concludes.

Parts of Salaam Venky may appear a touch simplistic and unsubtle, but there isn’t much out here that could be dismissed outright as unduly gratuitous. The film succeeds in pulling back from the brink when, on a couple of occasions, it veers close to courting a hint of excess. Some of the credit for that difficult-to-attain balance must go to the actors.

The director, who herself puts in a cameo appearance as a judge’s wife who cites a line from the Bhagvad Gita that Lord Krishna addresses to Arjuna, employs tried and tested methods to record the trauma and grief of a single mother counting down to an inevitable tragedy. Yet, she manages to invest Salaam Venky with a veneer of freshness.

The camerawork by cinematographer Ravi Varman stands out thanks to lighting and angles that clearly haven’t been derived from the playbook of conventional family melodramas. A moving musical score by Mithoon, too, plays its part in imparting strength to the film.

Based on the book The Last Hurrah written by Srikant Murthy, Salaam Venky tells the story of a spirited young chess player, Venkatesh (Vishal Jethwa), who is afflicted with Duchenne Muscular Dystrophy and is inching towards death as his limbs and muscles degenerate at a steady, irreversible pace.

Venky’s doughty mother, Sujata (Kajol), resistant at first to the boy’s suggestion that he be granted the right to go in for euthanasia so that his organs can be donated to patients who need them, changes her stance and goes all out to have the law against mercy killing changed.

Mercifully, Salaam Venky does not lose its way in a welter of mush because the writing by Sammeer Arora and Kausar Munir reflects an acute awareness of the pitfalls along the way. The script skirts around them to present a drama that addresses complex issues surrounding euthanasia while keeping the discussions on its dynamics and ramifications refreshingly simple and straightforward.

The film’s moorings in popular Indian melodrama are clear. Cinema is Venky’s second love – the first, of course, is chess, a game that he teaches the nurse who takes care of him in hospital – and he never tires of referring to the noughties films that he loves (most of them starring SRK).

Salaam Venky, which opens with a song that borrows its catchline from Hrishikesh Mukherjee’s timeless Anand – zindagi lambi nahi badi honi chahiye – seeks to accentuate the poignance of the situation at the heart of the film by mentioning (or alluding to) the SRK starrers Main Hoon Na, Kal Ho Na Ho and Dilwale Dulhaniya Le Jayenge.

Salaam Venky is certainly not in the same league as Anand as a film about a terminally ill man, but it does have the meat to be a substantial addition to the canon. Someone says to Venky: Itni filmi hone ki zaroorat nahi hai. Much later, the judge appointed to hear the writ petition filed on Venky’s behalf reprimands the lawyer for resorting to too much drama.

These are clear indications that Revathy and her screenwriters are mindful of the line that separates the demands of a slice-of-life story and a dramatization of it for the purpose of enhancing of mass acceptance. It is a tightrope walk.

It is hard to say if Salaam Venky will strike a chord with the general public with a real-life story that made an up-and-coming chess star Venkatesh Kolavennu a legal cause celebre about a couple of decades ago. But it is easy to see that this is the sort of film that will find an audience far more readily when it hits a streaming platform.

Admittedly, Salaam Venky might have done well to play down its debt to films of the past and to shorten its length a bit. No matter how many of its passages might appear condensable, if not entirely expendable, the film as a whole makes its point firmly, clearly and with a lot of heart

Factored into the tale of impending doom is a love story and a family drama that play out parallel to each other. Venky’s childhood love Nandita (Aneet Padda), with whom he once dreamt of completing a bucket list of things to do in life, continues to be one of his principal anchors.

Venky’s life, whatever is left of it, also revolves around Shekhar Tripathi (Rajeev Khandelwal), the doctor who has done all that he can to keep the boy alive, and his younger sister Sharda (Riddhi Kumar), who was once torn between her father (Kamal Sadanah) and her mother after the messy break-up of her parents but is now by the side of her bedridden brother.

Salaam Venky has an array of other supporting characters played by actors who add significant value to the film irrespective of the length of time they are on the screen – Prakash Raj as Judge Anupam Bhatnagar, Rahul Bose as activist lawyer Parvez Alam, Aahana Kumra as television journalist Sanjana, Priyamani as public prosecutor Nanda Kumar and Ananth Narayan Mahadevan as an avuncular guru. Last but not least, Aamir Khan has a crucial special appearance.

Outstanding as the performances are, Salaam Venky does not eventually hinge on the glamour of a star. It is the story that is the star. The director does full justice to it.