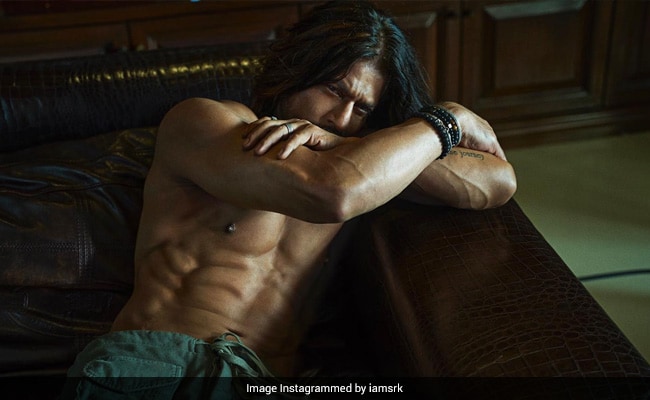 Shah Rukh Khan has treated his Insta family to his new shirtless picture fromPathaan, and we can’t keep our eyes off. In the image, Shah Rukh is showing off his ripped physique and long hair as he intensely looks at the camera. Sharing the post, the superstar wrote, “Me to My Shirt today: ‘Tum hoti toh kaisa hota….Tum iss baat pe hairaan hoti, Tum iss baat pe kitni hansti…….Tum hoti toh aisa hota..'” He concluded the post by writing, “Me also waiting for #Pathaan.” Soon after he shared the post, his fans flooded the comment section. A fan wrote, “Pathaan aarha h,” while others dropped heart, fire and love-struck emoticons.

Helmed by Siddharth Anand, Pathaan also stars Deepika Padukone and John Abraham in the lead roles. The movie is scheduled to release on January 25 next year.

Well, Shah Rukh Khan surely knows how to keep his Insta family hooked. It is not the first time Shah Rukh shared a picture of his showing off his ripped physique. Earlier, introducing his look from Pathaan, he shared a shirtless photo and styled his hair into a messy bun. In the caption, he wrote, “Shah Rukh agar thoda Rukh bhi gaya toh Pathaan ko kaise rokoge.. Apps aur Abs sab bana dalunga….“

A few days ago, Deepika Padukone dropped an update by sharing a picture from a dubbing studio and captioned it as “#WIP (work in progress) #pathaan“

On the work front, Shah Rukh Khan also has Jawan and Dunki in his kitty.

Counting Begins For Election To 1 Lok Sabha, 2 Assembly Seats In UP