New Delhi: Actor Sidharth Shukla, best known for his role in the daily soap ‘Balika Vadhu’, made his Bollywood debut with Shashank Khaitan’s ‘Humpty Sharma Ki Dulhaniya’ in 2014. The Varun Dhawan and Alia Bhatt starrer had Sidharth Shukla in a supporting role. Sidharth left for his heavenly abode in September last year, after suffering from a cardiac arrest, at the age of 40.

As the film clocked eight years on Monday, the film’s director, Shashank Khaitan, shared a post, remembering the late actor. Sharing a poster of the film, Shashank penned a long note, which read as, “8 years of #hskd … At times it feels like yesterday and at times another lifetime… So much has happened in just 8 years … Varun got Married. Karan had babies. I had a baby. Alia got married and is about to have a baby. Many of my HOD’s who were kids then, now have babies … Okay enough of baby talk. Raj and Bhanu went on to become film Directors. We battled through Covid. Siddharth Shukla left us for a better place 👼🏼.

He further continued, “As I write this post, I am on recce for my next film. My heart is filled with gratitude. Thank you Karan for the continuing belief in me. You truly have given me wings to fly. Aaloo seeing you soar so high, makes me so happy and proud. Wishing you the best in all the new roles you will embark. VD my brother my friend. We celebrate each others success and encourage each other through our failures. We are truly Karmic brother’s… My unbelievable cast and crew… thanking you for believing in me then and now… Loads and loads of love. My family, my strength and my biggest cheerleaders. Love you.”

He concluded the note with, “Nals my soulmate and companion, thank you for everything and thank you for Masaya. The greatest joy I feel is opening my eyes and seeing her smile. And to my mentor Dr. Daisaku Ikeda. Deepest gratitude for selflessly propagating the law. Its because of #nammyohorengekyo that through everything I smile, I fight and feel happiness everyday.”

Shashank also shared pictures and videos from the film and their press conferences during its promotions, to mark its eighth anniversary. Sharing a picture of himself along with Alia Bhatt, Karan Johar, Sidharth Shukla, Varun Dhawan, Karan Johar and Dharma Productions’ CEO Apurva Mehta, he wrote, “8 years of HUmpty Sharma ki Dulhaniya….so much gratitude…Miss you Sid…still cannot believe you are not with us…Karan my friend/father/guide, love you to Mars and back….Apurva for always showering me with your love and trust…VD and Alia…my Darlings…the best actors and friends a Debut director could have asked for.” 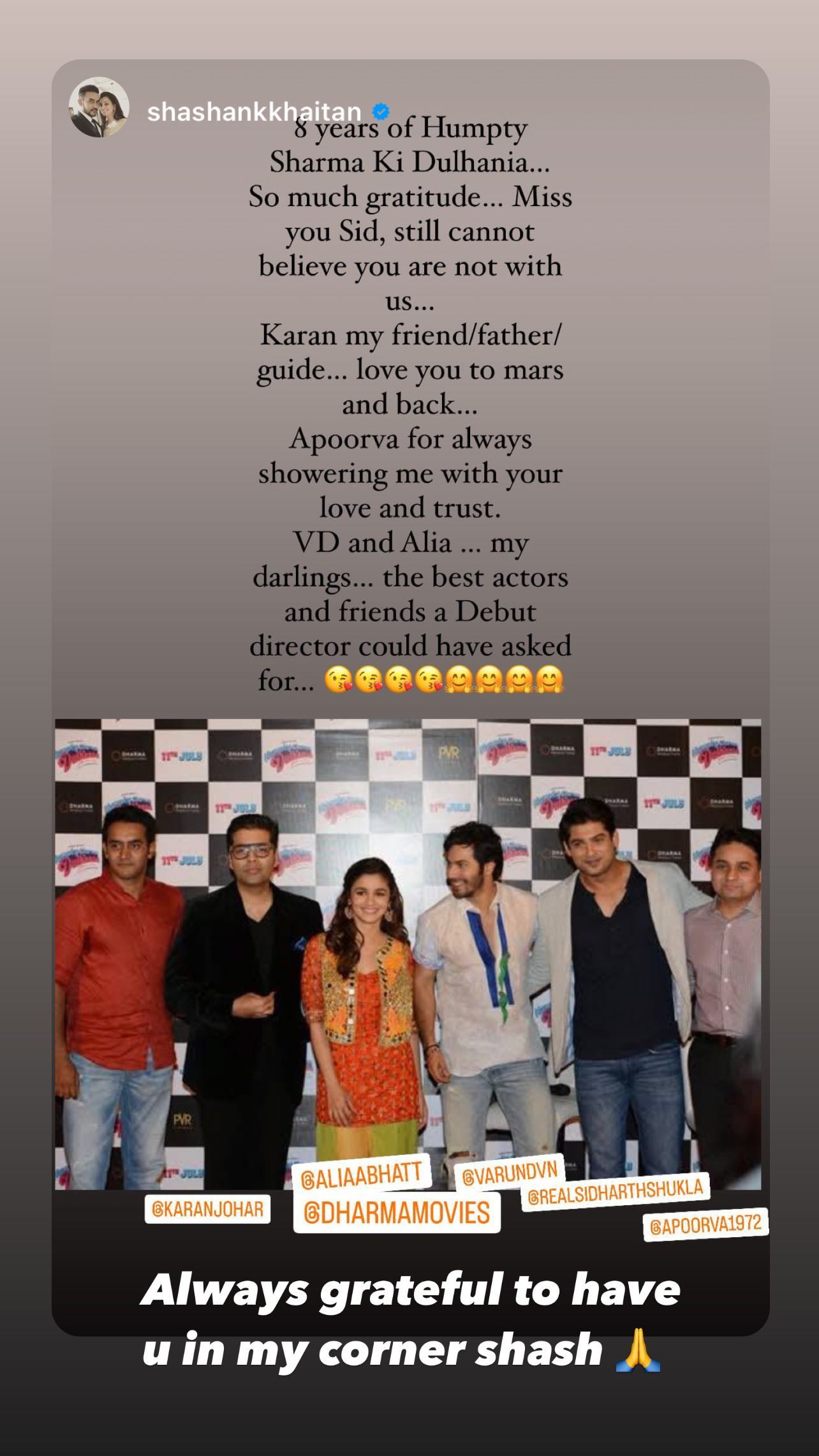 Shashank story was re-shared by Varun.

Varun also took to his Twitter handle and shared a couple of pictures featuring Sidharth as he wrote, “8 years of #humptysharmakidhulania a very special film but today I remember it for the time I got to spend with sid on the film. He was kind hearted, protective and always passionate about work and friends.”

Sidharth Shukla left everyone grieving with his sudden demise. The actor is remembered time and again by his fans and co-stars and will always remain in their hearts, forever.