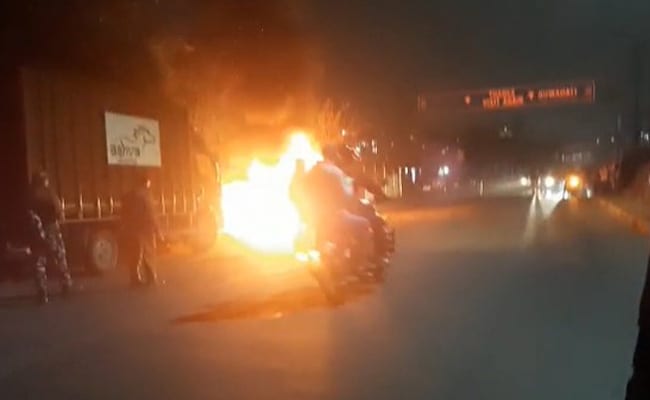 The vehicle on fire near Mahavir Park in Shillong’s Jhalupara locality.

An SUV with an Assam number was set afire by unidentified people in Maghalaya’s capital city Shillong on Tuesday night, hours after a clash over a state border dispute in the West Jaintia Hills claimed six lives. A fire brigade put out the blaze that left the SUV completely burnt, but no casualties were reported.

Police sources said the incident near Mahavir Park in Jhalupara locality is “believed to have been an aftermath of the firing incident at Mukroh village in West Jaintia Hills”.

In the morning, a forest guard from Assam and five people from Meghalaya were killed in a firing incident at Mukroh village, leading to tension in the inter-state border region.

Meghalaya suspended mobile internet services in seven districts of the state for 48 hours as flare-ups on the two state’s border can escalate quickly, as seen not too long ago.

The incident took place when a team from the Assam forest department tried to intercept a truck allegedly carrying smuggled timber, around 7 am. The vehicle sped away, leading to a chase that ended in Meghalaya territory after the forest guards managed to puncture one of the truck’s tyres. Local villagers saw this as trespass and surrounded the Assam police and forest guards.

Conrad Sangma, Chief Minister of Meghalaya, was quick to react. He called the incident “unfortunate”, and said the Assam police fired first.

The Meghalaya government shut down mobile internet/data services in seven districts of Meghalaya beginning from 10:30 am today, “to prevent the misuse of media (WhatsApp and social media like Facebook, Twitter, YouTube etc) to disturb peace and tranquility in the state”.

The Meghalaya government also filed an FIR and ordered a judicial inquiry to determine the facts of the incident.

The border dispute goes back decades. Meghalaya was carved out of Assam in 1972 and it challenged the reorganisation act of 1971, leading to disputes in 12 areas along the 884.9-km border.

In March this year, Assam Chief Minister Himanta Biswa Sarma and Meghalaya’s Conrad Sangma, in the presence of Union Home Minister Amit Shah, signed a “historic” agreement that was supposed to resolved the dispute at six of the 12 places. Amit Shah had claimed that 70 per cent of the border disputes were now resolved.