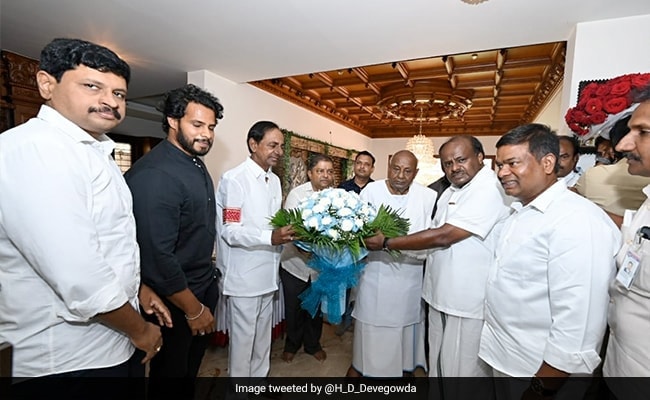 KCR, chief of the Telangana Rashtriya Samithi (TRS), had earlier travelled to Bengaluru and met Mr Kumaraswamy and his father and former Prime Minister HD Devegowda. The JDS leader arrived in Hyderabad yesterday for the meeting.

The meeting between the two leaders comes against the backdrop of Opposition parties holding meetings to put up a united front against the BJP. It also comes as KCR’s latest push for a national role.

The new party is expected to be launched around Dussehra, which will be celebrated on October 5. Late last month, KCR had visited Janata Dal United (JDU) leader and Bihar Chief Minister Nitish Kumar in Patna and held talks on stitching together a united Opposition front against the BJP. Addressing a joint press conference in Patna with Mr Kumar, the Telangana Chief Minister had said: “We will try to unite all Opposition parties in the country.”

Mr Kumar, who parted ways with the BJP last month and formed a new government in Bihar with Tejashwi Yadav’s Rashtriya Janata Dal (RJD) and Congress, visited Delhi last week and met leaders from Opposition parties to discuss the strategy to take on the BJP.

KCR mooted the idea of a national party at a recent TRS plenary session and also at various public meetings. The new party flag is likely to retain TRS’ pink colour, with the India flag embossed on it.

He has already promised free electricity to farmers across India, should his party come to power at the centre. He has held meetings with farmer leaders from 26 states.

KCR has been talking about the Telangana model of development schemes for the agricultural sector, free power and welfare schemes like pension for the elderly. He has been quoting growth figures of Telangana since he took over as Chief Minister in 2014, just like Arvind Kejriwal talks about schools and “mohalla clinics”, among other sops for the public.