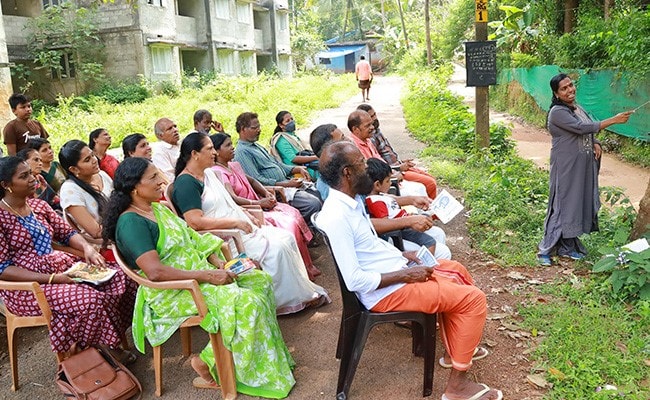 Septuagenarian Janaki Amma relishes her newfound love for Hindi in a small Kerala village, and repeats the brief sentence taught to her as part of an effort by a panchayat to achieve 100 per cent Hindi literacy.

At a time when Kerala, along with Tamil Nadu, is opposing any attempts of ‘Hindi imposition’, and netizens engaging in heated debates over the issue, Janaki Amma is bowled over by the articulation of the sentence “Ek thandi andheri raat sadak pe ja raha hai” (going down the road on a cold dark night) and the excited granny repeats several times what the instructor taught her.

The need to communicate with the sizeable migrant worker population in the village seems to be the spark for such an initiative.

The objective is to declare Chelannur a complete Hindi literate panchayat, the first such civic body in Kerala and probably the first in south India, by Republic Day next year, authorities in the Congress-ruled Chellanur village panchayat here said.

The priority of the authorities was to implement a unique project with its limited funds utilising the human resource in the village panchayat.

But, the practical reason that persuaded them to finalise the Hindi literacy programme was the huge presence of migrant workers in the panchayat. 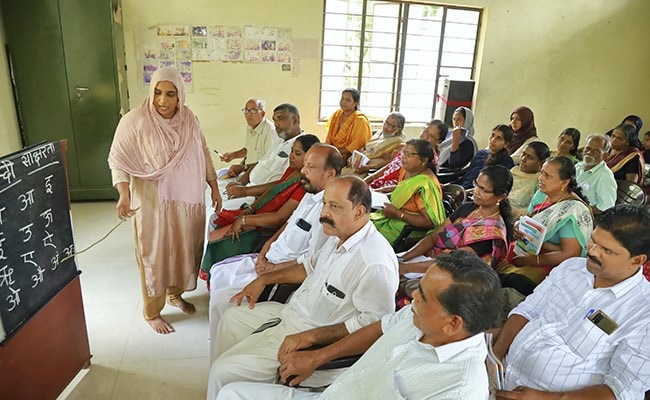 Of course, long before a Parliamentary panel’s recommendations to make Hindi the medium of instructions in higher education institutions triggered a political controversy in the country and states like Kerala and Tamil Nadu strongly opposing the proposal, the Chelannur village panchayat launched its efforts to turn itself completely Hindi literate.

The 72-year-old Janaki Amma used to repeat the sentence every now and then, maybe out of excitement to learn something new at the dusk of life, her daughter Athmini, a neighbourhood volunteer, said.

Like Janaki Amma, hundreds of villagers, cutting across age, gender and educational barriers are learning Hindi in the village panchayat, where there is a huge presence of migrant workers from northern states, for some time as part of the civic body’s ambitious mission to achieve 100 per cent literacy in the language.

The immense participation of people in the programme was surely due to the fact that the project would help them equip with basic Hindi skills to communicate and deal with the guest workers, who are now an integral part of their social life, authorities said.

“There is no connection between our project and the recent controversy regarding Hindi. The conceptualisation and other basic works of the project began last year. Ahead of the launch, a survey was conducted to identify those who are not well-versed in Hindi and those who are interested to learn the language,” he told PTI.

A series of workshops were conducted and an expert panel of instructors was formed from the village panchayat itself to train the aspiring learners.

Besides Hindi teachers, ex-military personnel, Gulf returnees and homemakers who are fluent in the language were also identified and included in the panel, he said.

Even the available time in between the weekly meetings of all-women network ‘Kudumbashree’ and the lunch and tea break amid the MNREGA activities are utilised for Hindi learning in Chelannur these days.

Premises of village houses, courtyards and other common platforms in each ward began to bustle with Hindi words and usages.

Certain wards were conducting 8-10 classes a week to achieve the target and even evening classes were arranged to benefit both instructors and learners, to ensure their job hours were not affected.

“The response from the public was beyond words. Though we targeted people up to age 70 only, even people aged 77 and 78 years are part of our project now. For people like Janaki Amma, the learning gave a revived enthusiasm and energy,” Nousheer added.

Concurring, Janaki Amma said she was really enjoying attending the evening classes with her daughter, son-in-law and friends.

“I had to stop my studies at fifth standard. After that, now I am learning again. This is really good … They are teaching us necessary words and sentences we can use in daily life. My grandchild, a Plus Two student, also attends the class at times,” she told PTI.

Besides his love for learning a new language, Abdul Salam, another senior citizen, feels it was the need of the hour to know Hindi to make daily life easier.

“In the local provision store here, the delivery boy and helper are migrants. Hotel and construction workers are migrants. The person who comes for menial jobs at home is a guest worker. I felt that it would be good if I could ask him in Hindi whether he had his food. So, I decided to pursue this learning programme,” he said.

Panchayat Saksharatha Prerak, Sasikumar said an organisational committee, with people from various walks of life including leaders of political parties as members, was formed in the beginning.

“According to the door-to-door survey we conducted, over 9,000 persons were unable to write Hindi. Nearly the same number of villagers could not read the language and over 15,000 people do not know how to speak in the rashtra bhasha (national language),” he said.

Majority of participants in the survey demanded the panchayat authorities that besides reading and writing, they would like to get training to hone their speaking skills as communication with migrant workers is a major issue, he said.

The Kerala State Literacy Mission Authority, the block resource centre under the Sarva Shiksha Abhiyan (SSA) and Dakshin Bharat Hindi Prachar Sabha extended all support and assistance to the initiative.

“As a pilot programme, the first class was conducted at the eighth ward of the panchayat on August 15. Based on the feedback from there, classes began in other wards in the later days. At present, 94-96 classes are being held in all wards of the panchayat,” Sasikumar, also the panchayat coordinator of the programme, explained.

The preparatory work started last year. A total of 25-30 people are attending each class and three-four sessions are being conducted every week in each ward.

All the instructors were voluntarily providing service and the panchayat has earmarked only limited funds for the project with Rs 25,000 last year and Rs 50,000 this year, authorities added.

Located about 12 kilometres away from the city, Chelannur was the first total literate panchayat in Kozhikode district when the state attained complete literacy in 1991, the Prerak added.