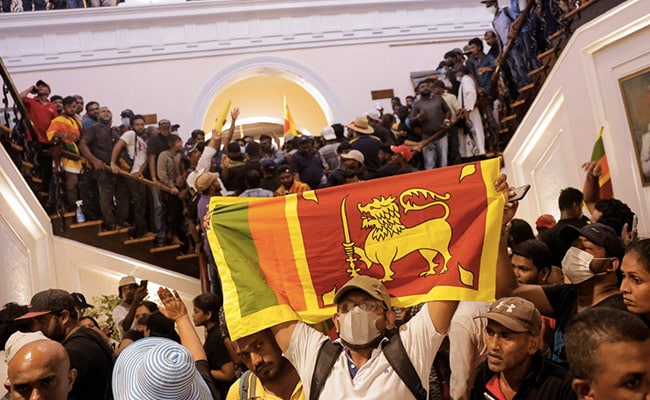 Both the US and China have offered support to Sri Lanka.

US Secretary of State Antony Blinken on Sunday urged Sri Lanka’s leaders to quickly find long-term solutions to the nation’s economic and political crisis, and suggested Russia’s blockade on Ukrainian grain may have contributed to the turmoil.

Sri Lankan President Gotabaya Rajapaksa said on Saturday that he would step down after protesters entered his residence following months of unrest over severe shortages of food and fuel.

“We would urge the Sri Lankan parliament to approach this with a commitment to the betterment of the country, not any one political party,” Blinken said of the upcoming exit of Rajapaksa, who had a rocky relationship with the United States.

“It’s incumbent on the government — whether it’s a new constitutionally selected government or existing government — to work quickly to try to identify and implement solutions that will bring back the prospect of long-term economic stability,” Blinken told reporters during a visit to Bangkok.

Such solutions must address “people’s discontent, which is so powerful and palpable over the worsening economic conditions,” he said.

He warned against attacks on protesters or journalists, saying Sri Lankans have “a right to protest, to peacefully raise their voices”.

“At the same time, we call for a full investigation, arrest and prosecution of anyone involved in any protest-related violence,” he added.

The top US diplomat also renewed his call for Russia to let an estimated 20 million tonnes of grain leave Ukraine, where it has been stuck after Moscow invaded the major exporter in February.

“We’re seeing the impact of this Russian aggression playing out everywhere. It may have contributed to the situation in Sri Lanka; we’re concerned about the implications around the world,” Blinken said.

Russia says it will allow Ukrainian ships loaded with food products to leave if Ukraine’s military demines its ports, an option rejected by Kyiv, which fears for the safety of its Black Sea coast.

In the past, Rajapaksa had irritated the United States with his dismissal of allegations of war crimes in the bloody finale of Sri Lanka’s decades-long civil war and his close economic partnership with China.

Both the United States and China have offered in recent weeks to support the once-prosperous island.

Rajat Patidar Ahead Of India Vs SA 1st ODI